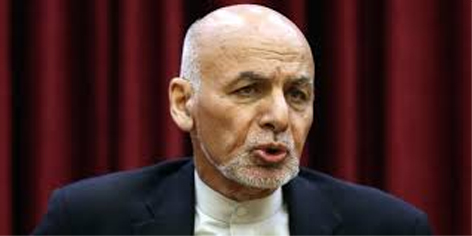 United Nations, Sep 24: Afghan President Ashraf Ghani on Wednesday said in order to achieve sustainable peace in Afghanistan, there is a need to get to the root of the terrorism problem “blighting our region” and address it as the global threat that it is.
Addressing the General Debate at the 75th session of the UN General Assembly through a pre-recorded video statement, Ghani listed the sources of the turmoil that his war-torn country has been dealing with over the years.
“Violence and warfare have also evolved, an evolution we Afghans have witnessed and suffered in real time. We are living and dying inside the fifth wave of global terrorism, in which global terrorist networks are closely linked with global criminal networks, making warfare totally unconventional and peace-building even more of a challenge,” he said.
Ghani added that as a state and society, Afghanistan has demonstrated the commitment, compassion and courage to take hard decisions to start direct peace talks with the Taliban.
“This will not be enough. For sustainable peace in Afghanistan, we must get to the root of the terrorism problem blighting our region and address it as the global phenomenon and threat that it is,” he said.
Outlining Afghanistan’s “clear plan” for the next five years, Ghani said it is based on building the country’s markets for economic development, moving from an aid to a trade model, increasing its labour and capital productivity in key areas in which Kabul have a competitive advantage.
“The objective is self-reliance, moving away from donor relationships to mutually beneficial partnerships. At the same time, we will invest in strengthening state governance structures to create an environment conducive to growth,” he said, adding that this would mean continuing to combat systemic corruption, improving public financial management systems and strengthening provincial and district-level governance.
He called on the 193-member General Assembly and the Permanent Members of the Security Council to help his country “achieve the end-state of a sovereign, united and democratic Afghanistan, at peace with itself and the region, capable of preserving and expanding the gains of the last 19 years”.
He said a democratically stable and prosperous Afghanistan will be an example of how “our collective will can overcome the turmoil and uncertainty that define our world today”.
Underlining Afghanistan’s critical role as a connecting power in the region, Ghani said his country is positioned right at the heart of Asia.
“Our water ties us together, our cultures and languages give us a common denominator. South Asia’s need for energy resources and Central Asia’s abundance of it makes Afghanistan a critical connector. Asia cannot integrate without us. We are right at the heart of untapped potentials that could bring prosperity and peace to our region,” he said.
Ghani, however, added that Afghanistan’s geography also means that the country is right in the middle of the turmoil that is affecting everyone today.
“We are experiencing the worst of it. But Afghanistan could be a model for successfully overcoming the turmoil we all face. That task, like the turmoil, is one that belongs to all of us, he said.
Ghani also stressed on the need for frameworks for the future that present pragmatic solutions for collectively addressing and solving the five drivers of the turmoil, particularly global terrorism and climate change.
“This will require the type of imagination and leadership that gave us the Universal Declaration of Human Rights, the UN Charter and the capabilities that overcame the global turmoil inflicted on the world by World War II,” he said.
The Afghan leader stressed that the untold sorrow of his country’s people, particularly its women and children, over the last 40 years serves as a reminder of the relevance of the UN Charter and also of its unfulfilled promise of “maintaining international peace and security”.
He said even though Afghanistan is facing multiple drivers of turmoil all at once, peace remains the nation’s most urgent and important priority.
Ghani emphasised that the role of the United Nations in standing for “our shared values throughout the peace process is absolutely critical”.
“The role of the UN and our international partners and allies will continue to be extremely important as our negotiating team sits across from the Taliban in Doha. At those talks, the Afghan people have a clear and urgent priority: a ceasefire. An urgent end to the violence will, more than anything else, give us a chance to progress,” he said.
Ghani also expressed gratitude to the world organisation for its support so far throughout this arduous process and for Secretary General Antonio Guterres’ call for a global ceasefire. (PTI)