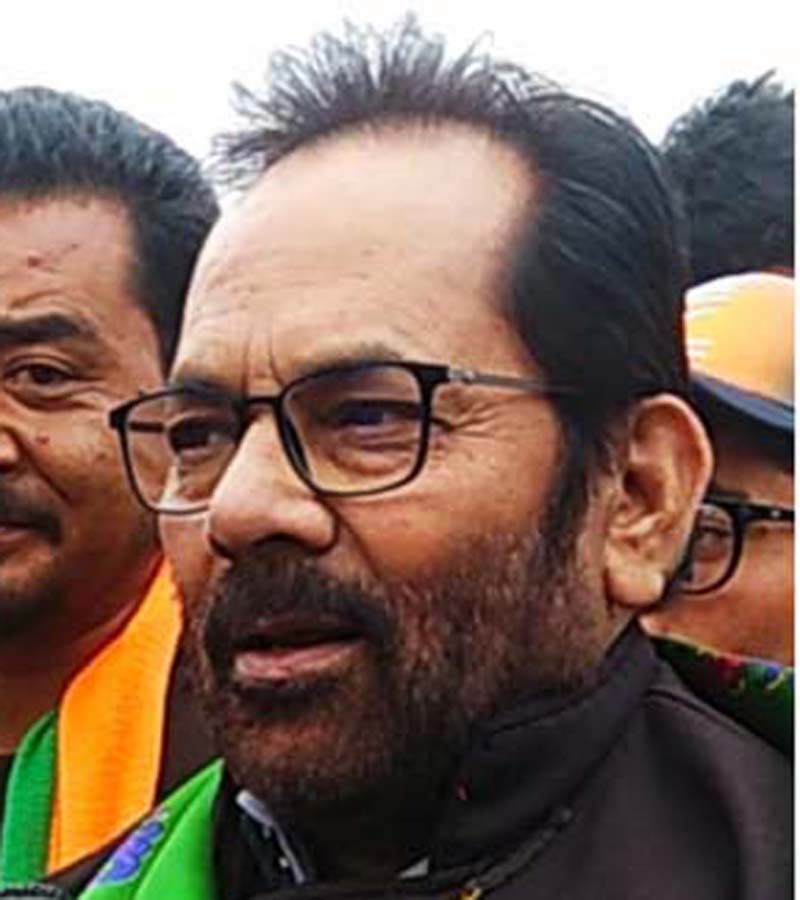 Avtar Bhat
LEH/KARGIL, May 1 : While Bhartiya Janata Party (BJP) in its election manifesto for Ladakh today reiterated its commitment to grant UT status to the region and inclusion of Bhoti language in the 8th Schedule of Indian Constitu-tion, the party senior leader and Union Minister for Minority Affairs, Mukhtar Abass Naqvi took a dig at opposition parties and said that Muslims in India are much more safe in the hands of Prime Minister, Narendra Modi than any one else.

Click here to watch video
Addressing a mammoth election rally at Kargil town, Naqvi said Muslims in India are much secure and safe under Narendra Modi Government and the mission of Modi ‘Sabka Sath, Sabka Vikas’ did justice with every community and segment of society including Muslims.
He said that the Muslims of Kargil, Drass and all other areas of Ladakh region are staunch nationalists and they are committed in preserving unity and integrity of the country. They are devoted to the national cause, security, sovereignty of the land and the territorial integrity, he added.

Maintaining that the BJP Government at the Centre launched a “Jihad against corruption” Naqvi said Modi’s policy of inclusive growth has ushered development throughout the country.
“The policy of inclusive growth of the Prime Minister has created marks of development from Kanyakumari to Kargil,” the Union Minister added.
The Central Government led by Modi launched a “Jihad against corruption and it created panic and depression among those who were involved in loot of public money from Kanyakumari to Kargil”, he said. He, while terming Modi Govt best of all previous Governments, said no communal riot took place in last five years while terrorism was also contained to a large extent.
Taking a dig at previous Congress and National Conference (NC) Governments in the State, he said even if 20 per cent of the total money that came for the development of J-K since Independence had been spent honestly, there would not have been a single problem in Kashmir. “Those people who ruled the State for most of the time were engaged in filling their own coffers instead of working for the welfare of the needy common man of the State,” the BJP leader said.
The Modi Government’s commitment has been “development with dignity” for Jammu and Kashmir and “we will carry forward this commitment”, Naqvi said . He said the Modi Government initiated about Rs 2 lakh crore worth of development projects for the State in the last five years.
“Be it the Zojila tunnel that connects the rest of India with Leh or the Kishan Ganga project in Bandipora or the hydro power project on the Chenab river in Kishtwar region, all these projects have opened up a new door for the happiness for J&K people,” Naqvi told the gathering.
He said a few changes have been made in the Ladakh Autonomous Hill Development Council (LAHDC) Act and the Council has been given more rights concerning the expenditures.
Naqvi said besides, lakhs of people of the State have benefitted from the Centre’s welfare schemes such as Ayushman Bharat, Ujjwala Yojana, Mudra Yojana and Jan Dhan Yojana,. Prime Minister, Modi has constructed a “highway of development and good governance” by demolishing “political one-way of corruption, caste, community and misrule”, he said. The people of the country want a Government with a clear mandate and not a one which is just cobbled up, Naqvi said.
BJP State president, Ravinder Raina, former State president of party, Sat Sharma and other senior leaders also addressed the rally.
Ravinder Raina, in his address, said that the region is the abode to the nationalist population. “We salute the Muslims of the Kargil, Drass and other areas for giving a befitting reply to the hate mongers and those who promoted separatism”. The Muslim population of the region have always rendered their useful services to the nationalist forces and contributed in the safety of the borders of the nation, he added.
Sat Sharma, in his address, recounted all the major development works that have been initiated on behalf of BJP and its local and national leadership and assured the public of BJP’s commitment to take care of every section and every region.
BJP State Executive Member Ashraf Ali, district president, Mohammad Ali, Haji Khuddam, BJYM State vice-president, Hassan Pasha, Zakir Zakiri, Mutrej Hussain, councillor Leela Bano, councillor Zenab Bi and others were amongst the prominent local BJP leaders present on the occasion.
Meanwhile, the BJP manifesto was released at Leh today by party State general secretary, (Org) Ashok Kaul which to woo the voters besides UT status to Ladakh region and inclusion of Bhoti in 8th Schedule of Indian Constitution also assured declaration of Ladakh under 6th Schedule of Indian Constitution as Tribal area, opening of Kailash Mansarowar road via Ladakh for pilgrims, early completion of Zojila Tunnel, Taglang La, Lachung La and Shinkula tunnels, early completion of Kargil -Padum & Nimoo Darcha roads, which will reduce air fare to Ladakh.
The manifesto further promised early completion of New Airport Terminal worth Rs 450 crore to manage over 10 flights daily, making of divisional status fully functional on priority basis, sanctioning of Government Medical and Engineering Colleges for Ladakh, early completion of Civil Airport at Kargil for which Rs 200 crore were already sanctioned, early completion of Railway Line Connectivity to Ladakh, creation of new districts of Zanaskar, Drass, Nubra, Changthang and Sham.
In power sector, the manifesto promised early completion of Transmission Line from Leh to Nubra, Kargil to Padam, Leh to Nyoma and Leh to Durbuk, besides it also promised early completion of Tamasha Nallah Hydel Power Project in Zanskar, multi purpose Terisha-Thoise Hydel Power Project and installation of 50 MW Solar Power point at Phey.
In tourism sector, the manifesto promised a revolutionary development or Ladakh region with establishment of Hotel Management Institute, full fledged functioning of Nobra Development Authority, creation of new Development Authority for Sham and Changthang, launching of Udaan Scheme for low cost air connectivity to Nubra and Kargil, legalisation of trade between India and China via Changthang, upgradation of Kalste and Nyoma medical centres to Sub District Hospitals and fully adaptation of Mission Organic Development Initiative.
During the manifesto releasing function, BJP general secretary, Dr Narender Singh and MLC, incharge Ladakh Vikram Randhawa besides other local leaders of the region were also present.