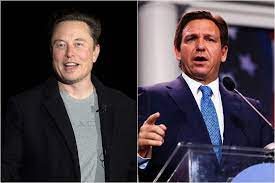 WASHINGTON [US], Nov 26: Twitter’s new owner, billionaire entrepreneur Elon Musk, says he will support Florida Republican Governor Ron DeSantis if he decides to run for president in the 2024 US election.
“Would you support Ron DeSantis in 2024, Elon?” a Twitter user asked on Friday, with Musk replying “Yes.” Former US President Donald Trump announced his latest presidential bid last week after the Republican Party failed to gain control of the Senate and an anticipated broad wave of support for the GOP never materialized in the House midterms.
Earlier this month, Musk reinstated Trump’s account, saying said Twitter’s decision to ban the former US President from the platform was a grave mistake that undermined public trust for half of the United States.
Trump’s Twitter account was banned after the US Capitol’s January 6, 2021 events.
Earlier this month, Twitter unblocked Trump’s account after the majority of participants in a survey conducted by Musk voted in favor of the measure. However, the former president has yet to tweet following the reinstatement of his account.
“I’m fine with Trump not tweeting. The important thing is that Twitter correct a grave mistake in banning his account, despite no violation of the law or terms of service. Deplatforming a sitting President undermined public trust in Twitter for half of America,” Musk tweeted on Friday.
Notably, in May, Musk tweeted that he had voted Democrat in the past, but “they have become the party of division and hate, so I can no longer support them and will vote Republican.”
“To independent-minded voters: Shared power curbs the worst excesses of both parties, therefore I recommend voting for a Republican Congress, given that the Presidency is Democratic,” Musk tweeted.
“Hardcore Democrats or Republicans never vote for the other side, so independent voters are the ones who actually decide who’s in charge!” he further added.
Earlier, Musk vowed to vote Republican in May earlier this year.
Elon Musk’s endorsement for Republicans came after he took over Twitter and began making massive changes to the micro-blogging platform. (ANI)