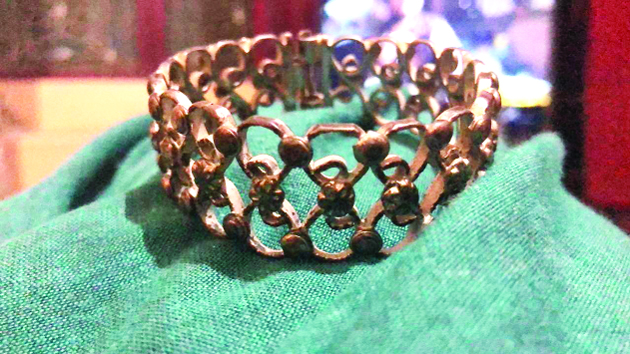 Aditi Sundan
A band of silver, with little bells hanging from it, encircles the wrist of a toddler on the verge of a tantrum. For the people belonging to the Jammu region in J&K, this might evoke a familiar sight.
Why arm a young and reckless child with what can and will inevitably be yielded as a weapon? But there is a good reason for it. Or, well, there is a reason for it. The silver bangle is one version of a significant piece of Dogra jewelery, a marker of a disappearing cultural identity.
Traditional jewellery of Dogras – an ethno-linguistic group residing in Jammu, Himachal Pradesh, and parts of Punjab and Pakistan – has resisted the changes wrought by time at the cost, maybe, of becoming obsolete. On the other hand, their absence from the shop windows of upscale markets might be exactly what has preserved its historical value and signature style.
At first glance, an almost artefact-like regard is commanded by these pieces of jewellery owing to their ancient design elements and grandeur, almost forbidding to wear. A closer look and you see shining through its rough glinting edges, the rustic that is its people – an agricultural tribe that may have branched out into the cities but remains deeply rooted in its villages, its customs, and its language.
The guluband, rani haar (a bridal necklace), balu (the iconic Dogra nose ring), or mrijhri (a bangle with a stylistic signature), persist and perpetuate themselves in households, not museums. It is no wonder that scholars have proposed that while time, migration, conversion etc., have led to the loss of the language for some people, tracing traditional pieces of inherited jewellery might be a better indicator for studying the movement of people across the region.
The movement of the mrijhri, a wide silver bangle/bracelet with bells and a latch, is particularly interesting. Despite existing in a largely patriarchal Dogra society, this ornament follows a matrilineal system of inheritance. Given to young daughters by their mothers, the mrijhri offers a feminist perspective of historical movement and family relations between communities and regions. A study by the founder of Speaking Archaeologically, Shriya Gautam, found that while there are small variations between the sample of the lattice laid bangle found among the people from Jammu, Himachal, and Punjab, particularly in terms of width and clasp, what remained largely consistent was that they were received from either the mother or a maternal relative. Surpassing religion, borders, and even language, the sonorous mrijhri resounds with the unrecorded stories of women across the foothills of the western Himalayas.
The Pahadi-Potahari region is home to a myriad of linguistic identities and variations in dialect take place every few miles. It is safe to assume then that Mrijhri must be one of many aliases. In my own family, the ornament is called mriddi. Raised with little means, my aunts did not inherit it from their mother, but they have ensured that they leave it to their daughters and granddaughters. My investigation also took me through Poonch, where a Muslim friend shared a picture of the broad bracelet, a marida, that her mother inherited from her aunt. In the struggle to preserve these carriers of the histories of women, a mere presence or absence is telling of distances travelled and hardships suffered. At the end of our conversation, my friend commented, “It is quite pretty, I think I will keep it.” I hope that she does. Little victories for our shared heritage take place everytime one decides to carry a piece of it forward,
However, I did not inherit a Mriijhri, so what stake do I make in all this? An unlikely one. I discovered that my father’s memory of the bracelet is tied to that of my grandfather sitting at his shop in the village, smelting and twisting ribbons of silver and gold to make this very ornament. I come from a long line of Dogra goldsmiths, a profession that is fighting its own battle against oblivion. In so much as jewellery is a manuscript of history, my ancestors, while possessing none of their own, could still claim to be its authors.
For most people, the mrijhri is not a call issued by forefathers, but by foremothers. All matrilineally inherited jewellery is, in fact. However, it is a call to which I have been deaf. My relationship with jewellery has been fraught with gender and identity. Not identifying with traditional femininity and averse to opulence, I never professed an interest in my mother’s jewellery. Ironically, a similar search for identity was to lead me to why we have weaved, carved, melted, and beaded together vines, stones, shells, bones, and metals, to create these emblems of identity and keepers of memory since the dawn of the species.
The Mrijhri is a reminder that even as patrilineage attempts to propagate itself, jewellery – that has served as the last resort and sole property granted to women under ancient societies as stree dhan – has formed the footprints of women that the waters of patriarchy attempt to wash away. The silver band around the child’s wrist then, almost always a woman’s intervention, may be just a custom, or it may be an unwitting attempt at preservation of memory, deeply sowed in the soil of childhood.