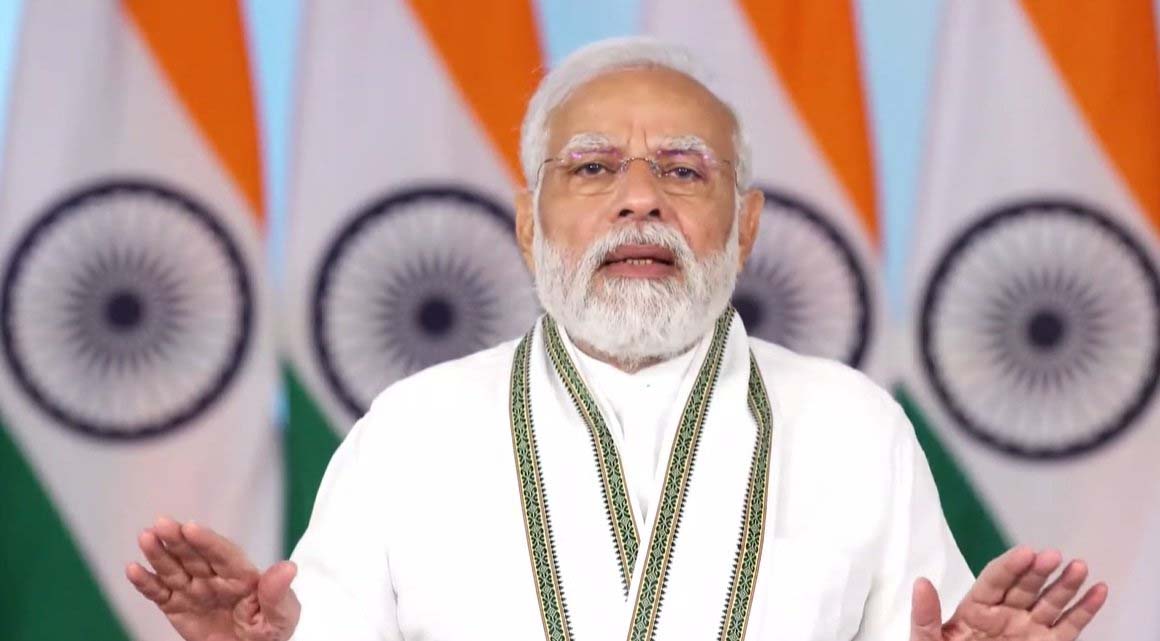 NEW DELHI, Sept 18: Prime Minister Narendra Modi’s NCC alumni card, multiple models of the upcoming Ram temple in Ayodhya and a statue of the mascot of the recently-held Chess Olympiad in Chennai are among the items which are highly sought after at an online auction of mementos gifted to the PM.
The online auction of over 1,200 such items, including a model statue of Netaji Subhas Chandra Bose and sporting memorabilia of the Commonwealth Games, started on Saturday and will go on till October 2.
The auction is being conducted through web portal pmmementos.Gov.In and it has one section that lists items under the head ‘Most Participated Auction’.
Among these sought after items is a memento given by the National Cadet Corps (NCC) in the form of an alumni card displaying Modi’s photograph, ‘Life Member’, year 2021 and ‘Directorate: Guj, DD & DNH’
The alumni card has received over 20 bids till about 11 AM on Sunday.
The auction had gone live at 10 AM on Saturday morning, coinciding with Modi’s 72nd birthday.
Other items in this category include several models of the upcoming Ram temple in Ayodhya, of varying dimensions and weights.One of these models was presented to the prime minister by Uttar Pradesh Chief Minister Yogi Adityanath.
The realistic, small-scaled wooden model shows Ram Mandir in Ayodhya, placed inside a glass case. It is a temple being built at the site of Ram Janmabhoomi, the birthplace of Lord Rama.
The principal construction of the sanctuary is based on a raised platform and has three storeys, reads the description of the item on the auction website.
“It has five ‘mandapas’ in the ‘garbhagriha’ which has been diligently designed on the replica model.The model is adorned with several vibrant flowers on all edges and corners of the structure,” it says.
Weighing 6 kg, the dimensions of the model are 45 cm x 41 cm x by 36 cm. The base price for this gifted item is Rs 10,800. Other Ram temple models include one weighing 2.5 kg spanning 46 cm x 30 cm x 35 cm; another one weighing 3.2 kg and one more model weighing 1.75 kg, according to the auction website.
Many other religious items, including a metallic ‘shankh’ (conch), statues of Lord Ganesha, a trident and a replica of the wooden idol of Tirupati Balaji Maharaj, are also in the category of the ‘Most Participated Auction’.
“Tirupati Balaji is an incarnation of Lord Vishnu. Lord Balaji is shown as having a ’tilaka’ on his forehead, a ‘shankha’ (conch) on his left shoulder, a ‘chakra’ (disc) on his right shoulder, Bhudevi (Goddess of the Earth), and Sridevi (Goddess of Wealth) at his heart. His right hand is in Abhay mudra while the left rests on his waist,” reads the description on the auction website.
This was presented to Prime Minister Modi by Governor of Andhra Pradesh, Biswa Bhusan Harichandan, it says.
The elaborately detailed metallic ‘shankh’ is an exquisite item and placed inside a red velvet box.
“The embossed conch shell depicts Lord Vishnu resting on Sheshnag, with Goddess Lakshmi massaging his feet. The upper portion of the shell is decorated with floral motifs. Vishnu is shown holding his attributes such as the mace, the lotus, the conch shell while his fourth hand rests on his thigh,” reads its description.
Spanning 10 cm in length, it weighs 1150 g and has received over 30 bids till 11 AM on Sunday.
A statue representing the official logo and mascot of the Chess Olympiad in Chennai 2022 is also among the highly sought after items in the ongoing auction.
India recently hosted the FIDE Chess Olympiad in Chennai with much fanfare. Its official logo was a chess knight named Thambi.
“It is a chess knight named Thambi and designed in the traditional Tamil attire, saying vanakkam (with folded hands). The name is a symbol of brotherhood, and it indicates that we all belong to one fraternity,” reads its description on the website.
The mascot statue is 31-cm-high and weighs 1650 g, and has received over 30 bids till 11 AM on Sunday. (PTI)
A mace, an ornate sword, a metallic statue of Ashok Stambh, and a statue of Nataraja are also in the ‘Most Participated Auction’ category.
A gold-plated miniature sculpture of an elephant with its trunk raised upwards, a wooden chess board with the 32 chess pieces made out of brass, and kept inside a briefcase are also part of the auction.
A framed photo showing a mission statement written in English, surrounded by floral borders on each side, with the first letters of all the line forming the phrase ‘MODIAGAINPM’, and a statue of Modi giving a speech, are also being sought after.
Besides, a white T-shirt autographed by the men hockey team which represented India at the Commonwealth Games 2022 and won a silver medal, is also in that category, with a base price of Rs 3 lakh, according to the auction website. (PTI)