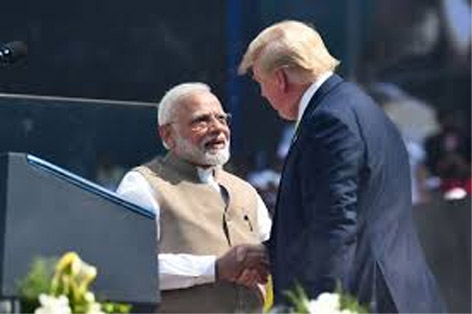 WASHINGTON, Feb 25: The meeting between Prime Minister Narendra Modi and President Donald Trump is important to America’s national security interest and global economy, a group of US lawmakers has said.
Senator Ted Cruz, who was the runner-up for the Republican presidential nomination in the 2016 election, said on Monday that India is a friend, an ally and the largest democracy on Earth.
“Trump and Modi meeting is important to US national security and the global economy. Last year I was proud to welcome PM Modi to Texas, where I reaffirmed my commitment to the India-US friendship,” Cruz said in a tweet.
Congressman Pete Olson said “great to see” Trump being welcomed by India, one of America’s biggest partners in both trade and diplomacy.
“I look forward to seeing what comes out of this historic visit, including a new US-India military partnership!” Olson said in a tweet.
Republican Leader Kevin McCarthy told Fox News how Trump’s warm welcome in India exemplifies the strong bond the countries share, and how the world is safer because of it.
“To have this relationship (with India) changes the course of history going forward. I give this president a great deal of credit… This creates a much bigger bond, and so for the president to do this and build with (Prime Minister) Modi, this makes the world stronger…,” McCarthy said.
“A strong India-US relationship on trade and defence is vital to combatting Chinese influence around the world. It is right for our nation to push India to set a higher standard on human rights and religious freedom as we work together on key issues,” said Senator James Lankford.
As the US continues to expand its relationship with India, particularly in trade, the US “must also talk about” human rights and religious freedom, he said.
“The Senate spoke with one voice in 2015 that religious freedom should be part of trade negotiations,” Lankford said.
The first day of President Trump’s visit to India projected a strengthened US-India partnership, a growing strategic and defence relationship and a much-needed and showy boost for both leaders, who have recently faced serious domestic political challenges, said Persis Khambatta, managing director of consulting firm South Asia BGA.
“The strong personal relationship between President Trump and Prime Minister Modi could play an important role as both countries continue to negotiate a trade deal in the near future – while it remains stalled for now, progress on trade is still a vitally important component of overall relations going forward,” Khambatta said in response to a question.
Addressing the massive “Namaste Trump” rally at Motera stadium, President Trump on Monday said that Prime Minister Modi’s rise from his humble background underscored the “limitless promise of the great nation”, remarks which reflected the bonhomie shared by the two leaders.
The chemistry between Trump and Modi was evident at the event as the two leaders hugged each other multiple times and heaped praise on each other in front of nearly one lakh people at the new-look Motera stadium in Gujarat. (PTI)