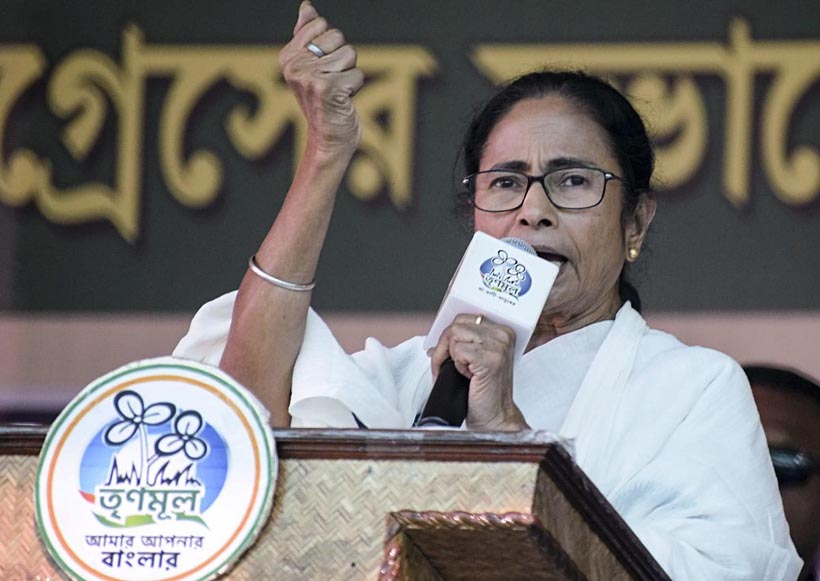 PANIGHATA (WB), Apr 20: West Bengal Chief Minister and Trinamool Congress supremo Mamata Banerjee Saturday said that Prime Minister Narendra Modi is suffering from ‘haratanka’, a phobia of losing elections and is trying to win in the state by dividing the people on communal lines.
“He(Modi) knows that he will lose the elections and that is why his face has turned pale. He is now suffering from ‘haratanka’ and everyday is uttering nonsense thinking about losing in Uttar Pradesh, Rajasthan, New Delhi, Punjab, Andhr Pradesh, Gujarat, Odisha and others,” she said at a rally here in support of party candidate for Krishnanagar Lok Sabh constituency Mohua Moitra.
“I do not mind if BJP wins in Tripura but that will not give him 543 seats. That is the reason he is roaming around in Bengal hoping to get votes by dividing people along Hindu-Muslim lines,” she added. Reacting to BJP’s allegations that she as chief minister of the state has done nothing for West Bengal, Banerjee said that people will seek answers from her if it is so.
Speaking at a rally in support of TMC’s Krishanagar candidate Mohua Moitra, Banerjee urged the people not to vote for BJP to save the country.
“Do not cast your votes for the BJP if you want to save the country … Have you forgotten demonetisation, the
suffering you underwent? Crores of people had suffered. Now when the elections have come will you not give him (Modi) the reply ?” she said.
“Give them (BJP) a tight slap for demonetisation by casting your votes against them,” she added. (PTI)