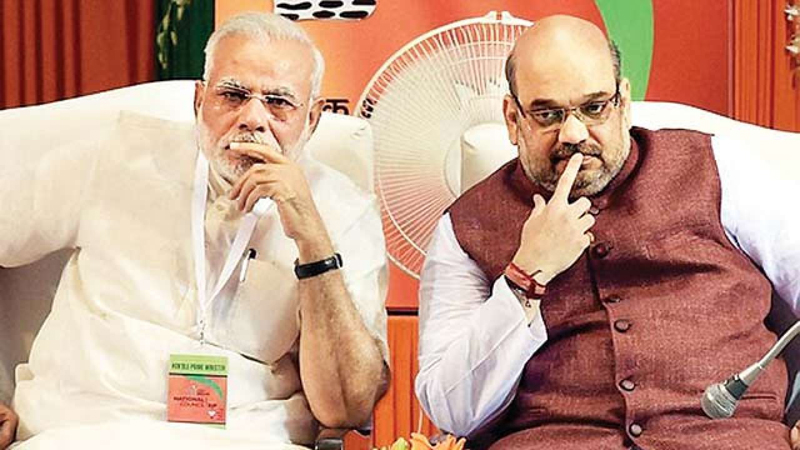 Sanjeev Pargal
JAMMU, Jan 13: Prime Minister Narendra Modi, BJP national president Amit Shah and Union Home Minister Rajnath Singh have favoured the Prime Minister’s formula of ‘One Nation One Poll’ for simultaneously holding Lok Sabha and Assembly elections in Jammu and Kashmir but maintained that it was still the Election Commission of India (ECI), which has to take final call on the Assembly polls in the State due to militancy factor.
BJP leaders from Jammu and Kashmir after attending strategy session of the BJP with top Central Government and party functionaries told the Excelsior that the Central Government as well as the BJP high command was firmly of the view that there can be no two opinion on sticking to the Prime Minister’s call for ‘One Nation One Poll’ and, therefore, the Assembly elections in Jammu and Kashmir, which were due before May 21, were proposed to be held simultaneously with the Lok Sabha elections.
In view of this, the BJP high command has deputed top party leadership to Jammu on January 20 to finalize the party strategy for twin elections.
BJP national general secretary (Organizations) Ram Lal, another general secretary and party’s pointman on Jammu and Kashmir, Ram Madhav and J&K Incharge, Avinash Rai Khanna will be reaching Jammu on January 20 to attend executive party meeting of the State unit to discuss and finalize the party’s strategy for Lok Sabha and Assembly elections.
The BJP leaders will also discuss preparations for Prime Minister Narendra Modi’s visit to Jammu on February 3 when the party also proposed to hold a rally at Vijaypur, the venue of foundation laying ceremony of multiple projects, to be addressed by Modi. The BJP proposed to use the rally including foundation laying of several projects, which were being seen as game changer by the party, as start of election bugle.
Party leaders said Modi, Shah and Rajnath were clearly of the view that the Central Government as well as the BJP as a ruling party stand by the PM’s slogan of `One Nation One Poll’ and would like conduct of Assembly elections in the State with Lok Sabha polls. However, at the same time, the BJP didn’t plan to interfere in working of the Election Commission of India and would abide by whatever decision the Commission takes on the State elections after obtaining assessment from its representatives as well as the State Government functionaries.
In his statement in both Houses of Parliament also, Rajnath had made it clear that the BJP was ready to provide whatever help the Election Commission of India need if it desired to hold simultaneous elections to Lok Sabha and Assembly in Jammu and Kashmir.
The Legislative Assembly was dissolved by Governor Satya Pal Malik on November 21 and as per the Apex Court guidelines, the elections to the Assembly have to be held within six months of dissolution of the House i.e. May 21. However, under exceptional circumstances, if the Assembly elections couldn’t be held in the State, the President’s rule can be extended by another six months.
Top BJP leaders from J&K confirmed that Central Government representatives as well as the BJP high command have deputed senior party leaders to Jammu to meet the party leaders on January 20 to discuss and finalize the party strategy for Lok Sabha elections.
After Prime Minister’s visit to Jammu on February 3, BJP national president Amit Shah would also visit the State in February end to give final touch to the party strategy for the elections.
The BJP had won three out of six Lok Sabha seats in the State in 2014 Parliamentary polls and 25 out of 87 Assembly seats. In both the elections, it was BJP’s best ever performance and the party leaders said they have been asked by the high command to go all out for repeat of 2014 performance in both the elections.