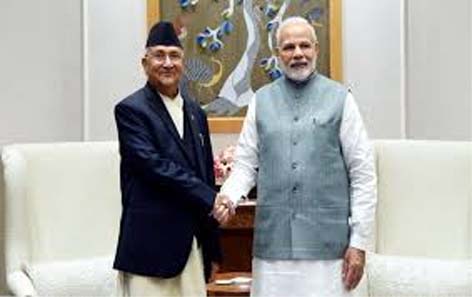 KATHMANDU/NEW DELHI, Jan 21:Prime Minister Narendra Modi and his Nepalese counterpart KP Sharma Oli on Tuesday jointly inaugurated the Rs 140 crore Jogbani-Biratnagar Integrated Check Post with an aim to improve bilateral trade and people-to-people contact.
Built with Indian assistance, the Integrated Check Post (ICP) is spread over 260 acres and is capable of handling 500 trucks on a daily basis.
The project, which will improve bilateral trade and people-to-people contact, was launched jointly by the two leaders via a video link.
It is the second ICP between the two countries after the first one was built in Raxaul-Birgunj in 2018.
After the inauguration, Prime Minister Modi said India is committed to simplifying and smoothening traffic with all friendly countries in the neighbourhood, and to “further facilitate contacts between us in areas such as business, culture and education”.
India and Nepal are working on several cross-border connectivity projects such as road, rail and transmission lines, he said.
“Integrated check posts at major places of border between our countries are greatly facilitating mutual trade and movement,” Modi said.
At the event, both the leaders also witnessed the progress in Indian-assisted post-2015 earthquake housing reconstruction projects in Nepal.
Out of India’s commitment to build 50,000 houses in Gorkha and Nuwakot districts, 45,000 have already been completed.
“The 2015 earthquake was a painful accident. Natural calamities like earthquakes test man’s tenacity and determination. Every Indian is proud that our Nepali brothers and sisters faced the sad consequences of this tragedy with courage,” Modi said.
It is a matter of great satisfaction that 45,000 out of 50,000 houses have been constructed under Indo-Nepal cooperation, he said.
“We hope that the construction of the remaining houses will also be completed soon. And these houses will soon be dedicated to Nepali brothers and sisters,” Modi added.
Addressing the event via video, Oli invited Modi to visit Nepal.
Prime Minister Modi said he looks forward to a visit to the neighbouring country this year.
“I wish that with your cooperation and support in the new year, we take our relationship to a higher level. And this new decade becomes the golden decade of Indo-Nepal relations,” Modi said.
National Security Advisor Ajit Doval, Foreign Secretary Vijay Gokhale and Nepal’s Ambassador to India Nilambar Acharya attended the inauguration in New Delhi and from Kathmandu, Foreign Minister Pradeep Gyawali, Minister of Commerce, Industry and Supplies Lekhraja Bhatta and Charge d’Affaires, Embassy of India in Nepal Dr Ajay Kumar witnessed the event from Singhdurbar secretariat.
India and Nepal have agreed to build ICPs along both sides of the borders to facilitate two-way trade and movement of people.
ICP Raxaul-Birgunj was inaugurated in April, 2018 with the aim to facilitate and improve Nepal’s two-way trade with India and third countries, Indian embassy here said in a statement.
The work on the newly-built ICP Jogbani-Biratnagar began in December, 2016 and completed in October 2019. It was built at a cost of 2.24 billion Nepalese rupees (Rs 140 crore) granted by India.
The ICP puts in place systematically planned, properly inter-connected and efficiently managed border check-posts at the authorised Jogbani-Biratnagar border crossing point between the two countries, according to Indian Embassy.
It is expected to facilitate movement of traffic and enhance bilateral trade. It has integrated three main border related functions — customs, immigration and border security — facilitates movement of both passenger and freight between the two countries.
Biratnagar, the third largest revenue collecting check post on the Nepalese side, is expected to reduce the waiting and processing time considerably.
For re-building earthquake-resilient 50,000 private houses in Gorkha and Nuwakot districts, India has pledged USD 100 million grant and USD 50 million soft loan.
For ensuring that the home-owners rebuild their homes with earthquake resilient features, India has hired the services of UN Development Programme (UNDP) Nepal and UN Office for Project Services (UNOPS) in Gorkha and Nuwakot districts respectively.
So far, reconstruction of 45,057 households (90.1 per cent) has been completed. India has reimbursed an amount of 6.96 billion Nepalese rupees from grant and 3.11 billion Nepalese rupees from soft loan to Nepal to date.
Prime Minister Oli has expressed gratitude to India for extending assistance for these projects.
The newly-built ICP consists of eight buildings incorporating administrative works, dispensary, customs clearance system and security system, among others.
It also features four inspection towers, two warehouses, two import-export processing area and two weighing machines that can measure loads of up to 80 tonnes. (PTI)