E-Paper
Home Latest News Modi Govt has removed ‘stains of failures’ by bringing in ‘steps of...

RAMPUR: BJP leader and Minorities Affairs minister Mukhtar Abbas Naqvi on Monday said that the Modi government has established ‘steps of Success’ by removing ‘Stains of Failures’ left by the earlier regime at the Centre.

While addressing Sushasan Diwas programme on the occasion of birth anniversary of former Prime Minister Atal Bihari Vajpayee here on Tuesday, the Mr Naqvi said that the people of the country will teach a lesson in the upcoming Lok Sabha elections to those people who are engaged in conspiracies against the Modi government.

The Union minister said that ‘sajish ki supari’ against Prime Minister Narendra Modi will be defeated with the commitment of ‘sushasan ka sarauta’.

He also maintained that the Rafael deal was done in a transparent and honest manner but the Congress is doing shameful politics even on the sensitive issue of national security.

The BJP leader said that Premier Narendra Modi’s decision of surgical strike and demonetisation had broken the backbone of terrorists and anti-national forces.

These decisions created frustration among the Congress and its ‘team of conspirators’. Out of this frustration, they first raised question on surgical strike then created ruckus on demonetisation.

The Union Minister asserted that Congress should realise that such conspiracies don’t last for long time. People of this country will teach a lesson to those people who had been engaged then in conspiracies against Atal Ji and now are trying to defame Shri Modi. Each and every conspiracy against national security will be defeated.

Prime Minister Narendra Modi has worked tirelessly with the commitment to ‘inclusive growth ‘and passion of making India ‘Vishwaguru’, he added. (AGENCIES) 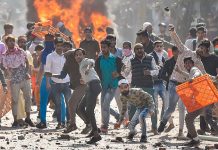