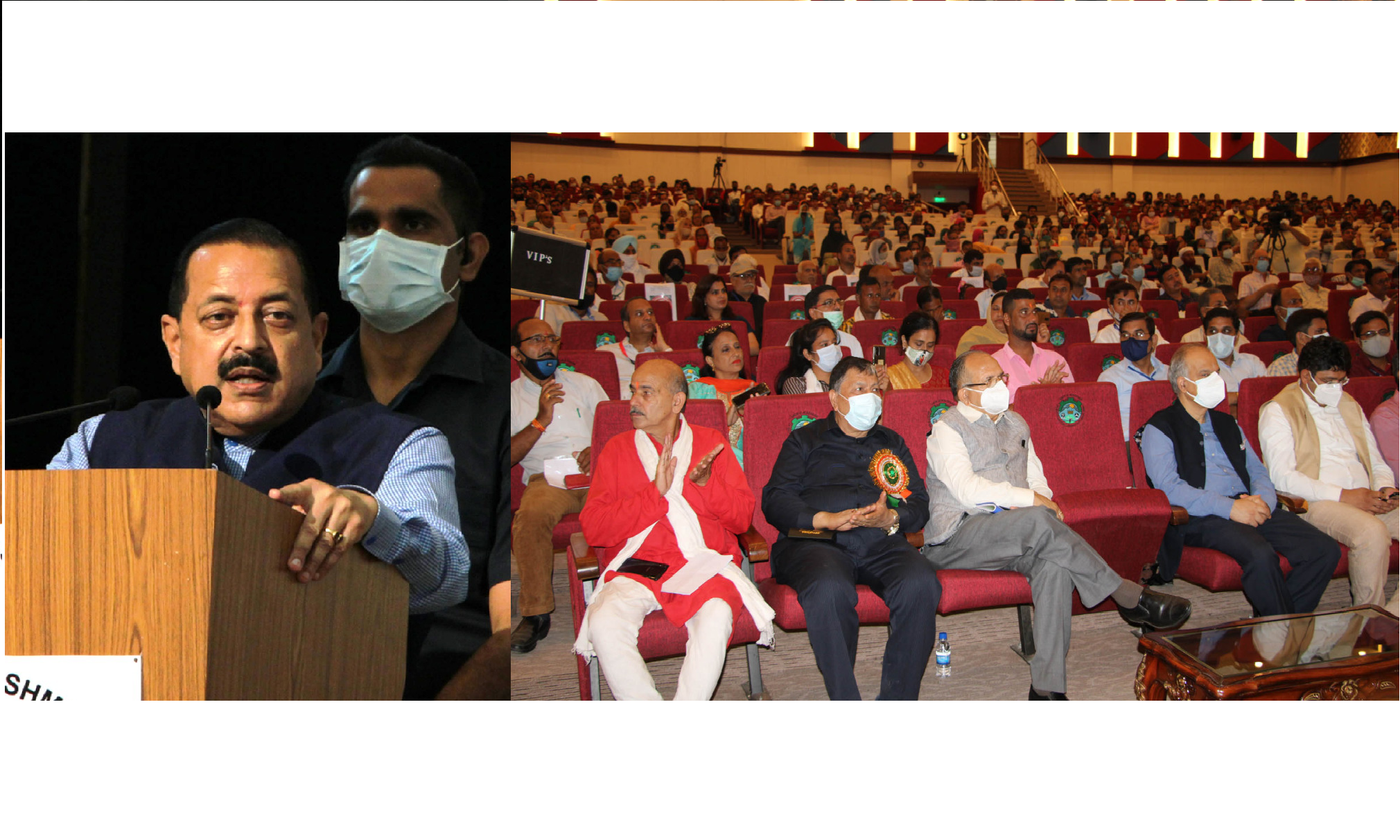 JAMMU, Oct 10 : Union Minister of State (Independent Charge) Science & Technology; Minister of State (Independent Charge) Earth Sciences; MoS PMO, Personnel, Public Grievances, Pensions, Atomic Energy and Space, Dr Jitendra Singh today said the Modi Govt is giving special impetus to Agriculture Start-Ups . He said, this is the golden period of Agriculture happening in India under Prime Minister Narendra Modi and technological interventions, research and innovation in agriculture under his leadership will double the farmers income by 2022.
The Minister said this while attending the concluding ceremony of 5-day long Northern India Regional Agriculture Fair 2021 as chief guest at SKUAST Jammu.
Speaking on the occasion, Dr. Jitendra Singh said that PM Narendra Modi is serious towards agriculture development in India that can be judged from the fact that two new Ministries, Jal Shakti and Skill Development & Entrepreneurship have been created only to promote agriculture and doubling the farmers income by 2022. He further mentioned that one of its important links is the recently launched ‘Heli-Borne Survey Technology for groundwater management & to map groundwater resources in arid regions for drinking and agricultural purposes.
Dr Jitendra Singh said that the agriculture and farm production has been revolutionised in India under the current government which is evident from the various initiatives taken by the government for the welfare of farmers like the Soil Health Card, Neem Coated Urea, PM Fasal Bima Yojana, PM Kissan Sammaan, e-Nam, PM Kissan Maandhan Yojana has not only empowered the Agriculture Sector financially & resourcefully but has also given an esteem and respect to the farmers which was lacking earlier.
Enumerating the development initiatives taken in J&K vis-à-vis agriculture & innovation, Dr. Singh said the establishment of north India’s first biotechnology park, two high seed processing plants at Kathua, launch of India’s first Aroma Mission will open new vistas of growth, opportunities and innovation in agriculture in Jammu.
Speaking to the farmers present on the occasion, Dr. Jitendra Singh emphasized that a farmer can now engage himself in multiple activities depending upon his capacity, resources so as to become integrated as the working in silos is over now. Sh. Singh maintained that the responsibility of the government is then to facilitate the farmer in every way which is being done without any compromise by the present government.
Giving examples of the entrepreneurs involved in various innovative agricultural practices & who are earning in lakhs, Dr. Singh stressed upon the students present there to become job providers and not job seekers, become agricultural technocrats through start-ups & be the architects of innovative India as the agriculture in India is no longer the traditional farming of 19th Century.
Dr. Jitendra Singh also urged SKUAST administration to promote 75 agricultural Startups from this university on 75 years of India’s independence on the lines of his Ministry which is also promoting start-ups as 75 young start-ups in science, 75 women start-ups in science, 75 SIT hubs dedicated to SCs and STs.
The Minister stressed on the integration of Institute of High Altitude Medicine, IIIM and SKUAST which should work on theme based projects not institution based projects for the composite outcomes and no overlapping.
The Minister also said that the student exchange programs should be encouraged as India is enriched with the best scientific and technological institutes like the national institute of plant genome research (NIPGR) and SKUAST students in this field can visit these institutions for better exposure and research intuition due to best technology available there.
The Minister further said that the proactive outreach for the start-ups is the need of the hour to get the best minds for the promotion of our products at national and international level be that the basmati rice, rajmash or other products.
For the promotion of the products and the start-ups, the Minister emphasized on the creation of a wider media space accompanied with the latest technology & social media boom so as to promote the local products and start-ups.
During his address, the Minister emphasized on sustainable agricultural practices and organic farming which is being promoted by the current government.
During his visit, the Minister laid the foundation stone of the faculty club, main campus Chatha and inaugurated a plant tissue culture laboratory at School of Biotechnology, SKUAST, Jammu, a herbal garden (Sanjeevani Tapovan) & ceremonial planting, also inaugurated Basmati Producers and Beekeeping Conventions.
The Minister also unveiled the world bank-ICAR funded IDP project during the concluding ceremony.
Professor J P Sharma, Vice Chancellor, SKUAST, Jammu in his address said that the agriculture fair has been possible only by the support of the central government in which the farmers and start-ups of the northern states and UTs have fervently participated. He further said that speciality agriculture in J&K will open up new opportunities for the progressive farmers and will pave a way for start-ups.
S K Malhotra, Agriculture Commissioner, GoI, R C Aggarwal, DDG (Education), ICAR, New Delhi, Dinesh Kulkarni, Organisation Secretary, BKS, Professor Manoj K Dhar, VC, Jammu University, Reddy, Director CSIR-IIIM Jammu also attended the concluding ceremony.