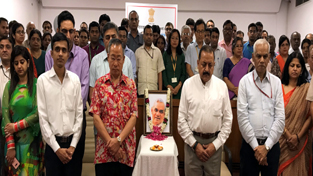 Excelsior Correspondent
MENDHAR, Aug 12: National Conference leader and MLA Mendhar, Javed Rana today flayed the Centre for not fulfilling expectations of a large section of public in Jammu and Kashmir State.
In a public meeting at Block Uchaad-Kasbalari, Rana voiced for dialogue between all stakeholders to resolve Kashmir issue. He said that Kashmir is a political issue and any delay in its resolution would only deteriorate the situation.
“Centre is playing vote bank politics by pursuing a hardened policy on Kashmir,” he said adding that law and order situation in Kashmir is getting worse with each passing day.
Others who spoke on the occasion were Nazir Hussain, Provincial NC Vice President; Zeeshan Rana, Provincial Secretary Youth; Showket Choudhary, District Secretary and other.

Govt to appoint Ombudsman for protecting rights of AIDS patients