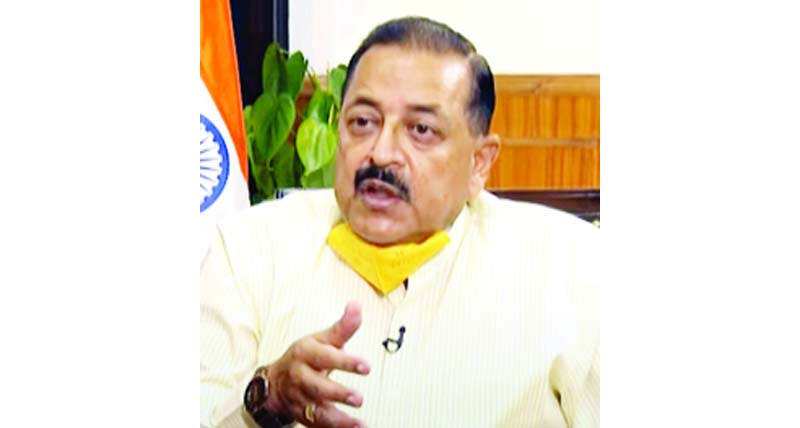 NEW DELHI, Sept 24 : Union Minister Dr Jitendra Singh said here today that misleading myths are being spread about the Farm Bills by certain vested interests who are trying to provoke the farmers for petty political gains.
In a detailed interview to Doordarshan, Dr Jitendra Singh said, the ridiculous irony is that baseless rumours are being spread in the name of certain provisions that do not at all exist in the Bills brought in the Parliament by the Modi Government. For example, he said, a wide spread campaign has been unleashed to misguide the framers into believing that the Minimum Support Price (MSP) has been stopped whereas in the Bills there is no such reference to the MSP system, which obviously indicates that MSP system will continue as before.
On the other hand, Dr Jitendra Singh said, the Farm Bills brought by the government will lead to the democratisation of the farming sector by giving the farmer freedom and choice to sell his crop to anyone, anywhere and if he wants, to earn more profits by joining the big companies. At the same time, in none of the Bills, there is even a slightest indication that the Mandis will end, which in other words means that the market system will continue as before and the Agricultural & Food Policy Center (AFPC) will also be in place.
Similarly, Dr Jitendra Singh said, the farmers are being provoked by being told that they will be facing exploitation by big companies in the name of contract. Quite contrary to this, the Bill contains sufficient provisions to protect the farmer from any exploitation, he said.
Elaborating further, Dr Jitendra Singh said, the contract and the agreement will guarantee the farmer to get the fixed price and farmers can withdraw at any point without any penalty.
Not only this, Dr Jitendra Singh said, the Bills clearly prohibit sale, lease or mortgage of the farmer’s land because the agreement is on crops and not on land. It is, therefore, a wrong interpretation that big businessmen will grab the land of the farmers and turn them into bonded labourers.
The Farm Bills also provide sufficient safeguards for the sale of crops in the open market said Dr Jitendra Singh. Citing an example, he said, when a farmer chooses to sell the crop in the open market anywhere in the country, the purchasers of the crop will be bound to make the entire payment on the same day or if procedural time is required within three working days. In case of default, there are also provisions of penalty on the purchaser, he added.
Dr Jitendra Singh alleged that those who are opposing the Bills and provoking the farmers are actually trying, in vain, to make it an issue for electoral considerations.