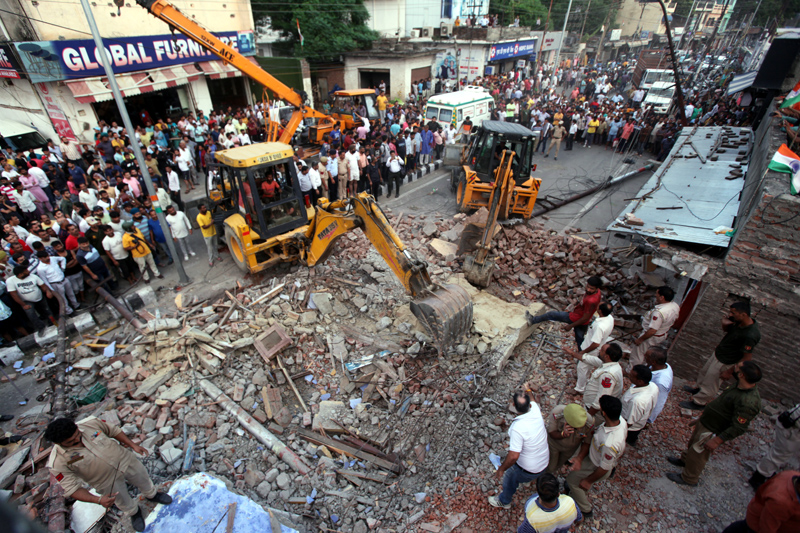 JAMMU, Sept 1: Around half dozen labourers had a miraculous escape after an under construction building collapsed on New Plot-High Court-Janipur-Bantalab road this evening. However, people held Jammu Municipal Corporation (JMC) responsible for the incident.
As per official sources, an under construction building collapsed in Janipur area on New Plot-High Court-Janipur-Bantalab road, here today.
On getting information, a team from Police Station Janipur led by Incharge SHO Inspector Devinder Singh immediately rushed to the spot and started rescue operation with the help of locals. Sub Divisional Police Officer (SDPO) West Rahul Nagar also rushed to the spot and supervised the rescue operation. Click here to watch video
Later, personnel from UTDRF also reached to the spot and assisted in the ongoing rescue operation. Two JCBs were brought to clear the debris as it was assumed that several people got trapped under the debris. However, no one was found after the debris was cleared.
Due to the incident, the traffic movement on the New Plot-High Court-Janipur-Bantalab road also got stranded and was later diverted from other routes.
While talking to the Excelsior, a group of people held JMC responsible, which issued or approved the building construction permission, without checking the status of it.
“I send my worker to deliver the tea, which the working labourers asked for. As soon as my worker reached back to the shop after delivering the tea, the building collapsed. My worker had a miraculous escape”, said Susheel Gupta, a Tea Stall owner.
“It is very astonishing that the construction work was going on between the business establishments of the two Councillors of the JMC. Was not it’s their duty to check whether the building owner has started the construction work with proper permission from the concerned authorities or not?”, the people said.
While talking to the media persons, Tehsildar Jai Singh informed that no casualty has been reported in the incident, while all precautionary measures were taken during the rescue operation.
“The building was around three to four decades old and the incident took place when the labourers were levelling the old building with the new one”, he said, adding that the accountability will be fixed once the inquiry is completed.
Councillor of Bharatiya Janata Party (BJP) from Ward Number 35 Yashpal Sharma alias Mantoo has demanded strict action against the officials of the JMC for their negligence due to which this incident has taken place.
The debris were cleared late night and the traffic movement was restored.
Due to the incident, the power supply to different areas also got snapped, which was later restored.
However, a case under FIR Number 96/2022 under relevant sections has been registered at Police Station Janipur and investigation started.