*LG Mathur stresses on need for providing digital literacy to artisans
Excelsior Correspondent
Leh, May 17: Minister of Electronics & Information Technology (MeitY) and Communications and Railways, Ashwini Vaishnaw, inaugurated National Institute of Electronics and Information Technology (NIELIT) at both Leh and Kargil and an IT-Enabled Incubation Center for Handicraft and Handloom Sector at Leh in the presence of the Lieutenant Governor of Ladakh, RK Mathur, at NIELIT Centre in Leh today.
Minister MeitY Ashwini shared Prime Minister’s vision for the development of Ladakh after the formation of the region as a Union Territory. He informed that all the small hamlets/remote villages in Ladakh would be provided with telecommunication towers for saturation coverage.
He stated that the upgradation of BSNL connectivity to 4G would start from 2023. Terming railways as important for the long-term sustainable development of Ladakh, Minister informed that preparatory works for connecting Ladakh with railways is at the stage of completion.
LG thanked Minister for his support for the development of Ladakh. He stated that the IT-enabled incubation center would prove beneficial for young entrepreneurs and start-ups from Ladakh. He stressed on the need for providing digital literacy to the young entrepreneurs and women self-help groups (SHGs) engaged in handicraft and handloom sectors. He shared the plans to start an Incubation Center in Kargil in the near future.
LG stated that handicraft and handloom sectors in Ladakh may be centered around two products- wool and wood. He emphasised on the need for high-level skill and digital literacy of the artisans to overcome the challenge of small production and a connectivity with the rest of the country. He stated that NIELIT would play a pivotal role in providing digital literacy to the artisans from Ladakh through its various training programmes. He shared that NIELIT would train 2100 artisans from Leh and Kargil. LG Mathur stated that incubation centres should not be confined to providing training in digital literacy but should also involve literacy in marketing, packaging, entrepreneurship, etc.
LAHDC Kargil Feroz Ahmad Khan thanked MeitY and LG Mathur for improving telecom infrastructure and digital connectivity in Kargil and setting up the NIELIT Centre in Kargil. MP Ladakh Jamyang Tsering Namgyal thanked Minister MeitY for sanctioning 73 mobile towers for Ladakh under Universal Service Obligation Fund (USOF).
Earlier, Director General, NIELIT, Madan Mohan Tripathi welcomed the guests. Executive Director, NIELIT J&K, Deepak Wasan, gave the vote of thanks.
LG Mathur also visited the Incubation Center at Old Bus Stand and inquired about the equipment and labs. 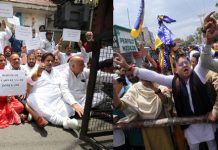 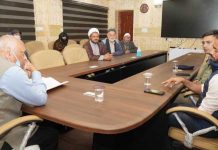 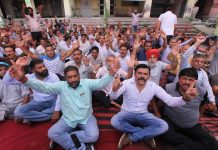