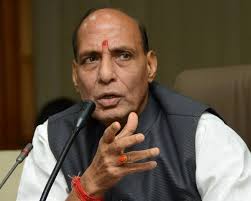 Sanjeev Pargal
JAMMU, July 8: Defence Minister Rajnath Singh said today that several militant outfits have been rendered as “leaderless” and they were also facing huge shortage of “resources”. The militancy was completely under check in the Valley.
Speaking in the Rajya Sabha, Rajnath said the militants were facing crisis of leadership as well as resources in Kashmir because of the best efforts put in by various security agencies, which were operating in coordination with each other to keep the militancy completely under check.
The Defence Minister was responding to supplementaries raised by the members in Rajya Sabha on Jammu and Kashmir situation including February 14 Pulwama terror attack in South Kashmir in which 44 CRPF personnel were martyred.
“There is a definite crisis of leadership and resources amongst the terrorist groups operating in Kashmir,” Rajnath said in an apparent reference to the killing of top commanders of various militant groups, which has rendered the outfits leaderless.
He added that security forces have kept the militancy completely under check.
Rajnath, who had visited Kashmir within two days of taking over as the Defence Minister in Modi 2.0 Government, said the probe by the National Investigating Agency (NIA) was on in Pulwama terror attack of February 14 this year and whether there was any kind of security lapse or Intelligence failure or not would be known only after the inquiry is completed.
The Government had handed over Pulwama terror attack to the NIA with a mandate to also investigate security or Intelligence lapses as 44 CRPF personnel were martyred in the attack. India had responded the attack by carrying out airstrikes at Balakote in Pakistan killing large number of Jaish-e-Mohammed (JeM) militants.
Rajnath said there was best coordination among Army, Central Armed Police Forces (CAPFs), Jammu and Kashmir Police and Intelligence agencies operating in Jammu and Kashmir.
The Defence Minister said all forward posts on the Line of Control (LoC) in Jammu and Kashmir have been strengthened to withstand and effectively thwart the terrorist attacks.
“Continuous improvements, including the use of modern technology, in the defences are made to make the forward posts more robust and resilient,” he added.
“The Army also carried out in-depth analysis of terrorist incidents and security breaches that are identified with various incidents,” Rajnath said.
According to him, there were virtually four kind of casualties suffered by the Army in militancy-infested Kashmir during thwarting infiltration attempts on the Line of Control (LoC), counter terrorist operations, terrorist initiated incidents and tactical actions.
He added that the fatal casualties suffered by Army personnel during terrorist attacks/tactical action in 2018 were 12, while the same were 13 in 2017 and six in 2016.
“The casualties pertained to tactical actions and total casualties in other activities could be more,” the Defence Minister said.
The shortage of bullet-proof jackets for armed forces is being met through procurement of 1.86 lakh such jackets by April 2020 for nearly Rs 639 crore, Rajnath said.
He added that there was no embargo on the import of raw material from China for making such bullet-proof jackets, and any supplier violating the tender norms would face action and could be disqualified.
The Defence Minister also assured the House that the Government has no plans to reduce the justified benefits provided to armed personnel with disabilities.
“In 2009, there was a shortage of 3,53,755 bullet proof jackets in the country, but procurement was not done for a long time. An RFP for procurement of 1,86,138 bullet proof jackets has been issued in April 2016 and the tender in this regard was allotted on April 9, 2018 to an Indian buyer,” he said.
In reply to another question on the total fatalities of armed personnel at higher altitudes including Siachen Glacier, he said there have been eight such deaths in 2018, five in 2017 and 20 in 2016.