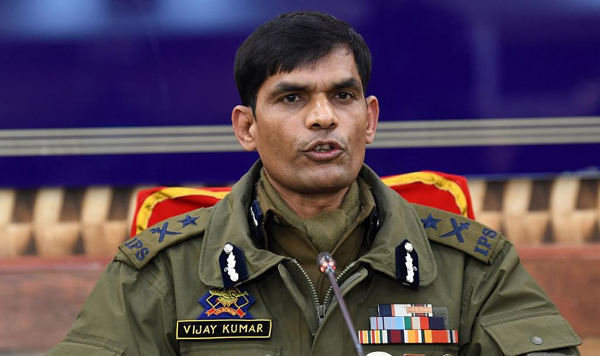 SRINAGAR, Sept 1: Security forces arrested a militant associate and busted two hideouts in Kashmir today while Additional Director General of Police Kashmir, Vijay Kumar, said that the security forces averted a major militant strike in Sopore area of North Kashmir.
The ADGP Kumar said that a major threat had been averted in Sopore last night by killing two militants who were planning to attack civilians in Sopore area.
He identified the killed militants in last night’s operation as Mohammad Rafi Lone, resident of Nathipora Bomai Sopore and Kaiser Ashraf Dar, resident of Tujjan Pulwama.
He congratulated the joint teams of Police and security forces for carrying out the operation in a professional manner in village Bomai area of Sopore.
A police spokesman said that security forces arrested a militant associate in South Kashmir’s Anantnag district today.
He said on the basis of specific information regarding movement of one militant associate, police and army’s 3rd Rashtriya Rifles laid a Naka at Hutmara Sandoz crossing this afternoon.
“One suspected individual approached the naka from Chak Hassanabad and on seeing it, started fleeing away in opposite direction,” he said.
“The party assessed the situation and displayed extreme restraint and fire control in not opening fire,” the police said, adding, “the security forces chased and overpowered the suspect, preventing him from opening fire, and apprehended him”.
On searching the individual, police claimed, one pistol, one magazine and six live rounds were recovered. “(The same) was planned to be used for targeted killing,” police said.
The arrested person has been identified as Faizal Ahmad Wagay, son of Mushtaq Ahmad Wagay, resident of Chak Hassanabad, Hutmara Anantnag.
A case (FIR No 78/2022 under Section 7/25 Arms Act 16,18,39 UAPA) has been registered in Police Station Mattan Anantnag.
The spokesman said that based on a credible input, police in Awantipora along with Army busted a militant hideout in the forest area of Syedabad Pastuna Tral.
He said that incriminating materials of JeM and materials like edible items, utensils etc were recovered from the hideout.
A case (FIR No. 140/2022 under relevant Sections of law) has been registered at Police Station Tral.
Security forces also busted a militant hideout in Dudbug -TY Shah Forest area of Baramulla district and recovered ammunition this morning.
The spokesman said that during the search operation, the team recovered two boxes of ammunition from underground hideout under tree. “The seizure included 1460 bullets of AK 47 and one cracked bag,” he added.
“The timely recovery of huge ammunition has thwarted any possible untoward incident and has scuttled the nefarious plans of militant outfits to derail peace and harmony in the Kashmir valley,” he said.