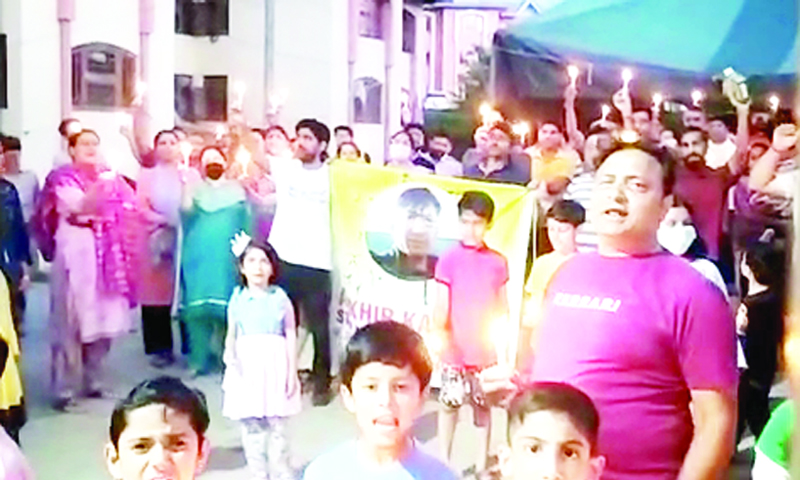 JAMMU, Aug 12: All Minority Employees Association Kashmir held candle light marches in all camps today to pay tribute to Rahul Bhat who attained martyrdom three months back.
The candle light marches were held at Migrant Colony Sheikhpora Budgam, Veerwan Baramulla and other colonies where rich tribute were paid to Bhat and other minority community members who attained martyrdom in Kashmir during last one year.
The prayers were held across the Pandit transit camps of the Valley to seek peace for Rahul’s soul.
The mourners said his killing has inflicted the pain and never ending suffering for all and Sundry of the KP community. “We have reached at a stage where the State of hopelessness and adversity has engulfed the entire KP community who were working in the Valley in PM employment package”.
Moreover, AMEAK (All Minority Employees Association of Kashmir) expressed satisfaction over the concern shown by Girdhari Lal Raina former MLC and spokesperson, BJP-JK UT towards the cause of employees belonging to religious minority community serving in Kashmir Valley. Since, the immediate
issue of the employees is security and most of the employees are living in rented accommodations, the
secure sufficient and concrete accommodation is very important factor for the security of the employees, they added.
AMEAK appealed to the Government that till the secure sufficient and concrete accommodation is built in the
Valley the religious minority employees shall be relocated by attaching them to R.C. Office
or shall be given breathing period or work from home through online mode till the proper foolproof security
plan for the minority employees of Kashmir is implemented and a healthy ecosystem for survival of<minority employees is build.
They urged Raina to take up the issue with Lt. Governor of J&K UT. The AMEAK expressed the hope that Raina will act as a bridge between the Government and the minority employees to create an atmosphere of dialogue with LG and package employees.