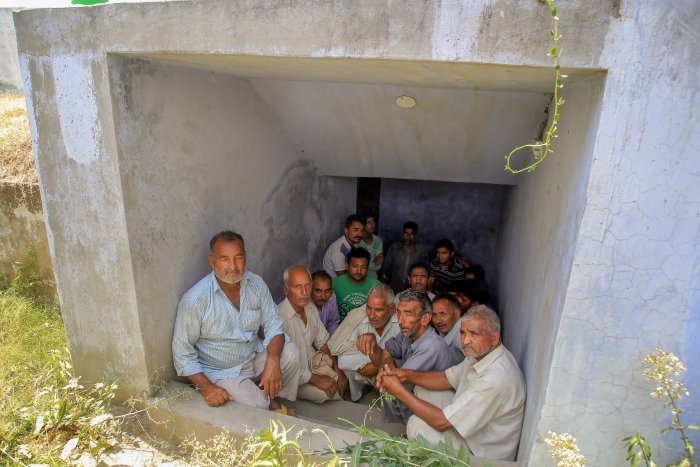 Mohinder Verma
JAMMU, Dec 10: Union Ministry of Home Affairs has agreed to bear the additional cost in the construction of over 7000 individual and community bunkers in border districts of Rajouri and Poonch in order to avoid further delay in start of work. Now, the State administration has planned to construct around 1000 bunkers during the current month itself although meeting the deadline fixed by the Union Government would be a daunting task for the concerned authorities.
These bunkers in Rajouri and Poonch were among a total of 13029 individual and 1431 community type bunkers sanctioned for the border districts of the State by the Union Ministry of Home Affairs at a cost of Rs 415 crore.
A total of 4696 individual and 335 community bunkers are to be constructed in Rajouri and 1320 individual and 688 community bunkers in Poonch district for the safety of the border dwellers during the shelling and firing from across the border by the Pakistan troops.
Though work on individual and community bunkers was started in Jammu, Samba and Kathua districts well in time and large number of them have already been constructed yet in Rajouri and Poonch districts work on not even single bunker could be started till date due to poor response to the repeated tenders floated by the Roads and Buildings Department, which has been selected as the Nodal Agency for the task, official sources told EXECLSIOR.
“Every time the contractors quoted rates more than the ceiling fixed by the Union Ministry of Home Affairs for construction of each bunker as such Roads and Buildings Department was not in a position to finalize the tenders”, they informed.
Due to inordinate delay in start of work on bunkers in Rajouri and Poonch districts resentment was brewing among the inhabitants of the border areas, who had even started accusing the State administration of being non-serious towards their safety and security, sources further said, adding “in view of poor response to the tenders they had even started pressing for getting the work executed either through R&B Department or Rural Development Department”.
Finally, the matter was discussed at the level of the Chief Secretary, who in consultation with the Governor vigorously pursued the issue with the Ministry of Home Affairs. “The MHA was apprised that due to high construction cost in Rajouri and Poonch districts as compared to Jammu, Samba and Kathua districts the contractors were not coming forward to execute the work”, sources said.
As a documentary proof, the rates quoted by the contractors in three rounds of tenders were also placed before the Border Management Division of the Union Ministry of Home Affairs for appraisal and necessary action.
“Finally, the MHA has bailed out the State administration of the crisis by conceding its request to bear the additional cost on the construction of over 7000 bunkers in Rajouri and Poonch districts”, sources said, adding “it has been made clear by the MHA that this special provision will be for these two districts only and in other districts cost of construction of individual and community bunkers would remain unchanged”.
When contacted, Commissioner Secretary to Government, Roads and Buildings Department, Khurshid Shah confirmed that MHA has conceded the J&K’s request of meeting the additional cost on construction of bunkers in Rajouri and Poonch districts.
“Now, we are planning to start work on around 1000 bunkers during the current month itself and work on remaining will begin next month”, he said, adding “in respect of certain bunkers allotment of work will be made on the basis of response received during the last tendering process while as fresh tenders will be floated for remaining bunkers”.
However, he admitted that meeting deadline for construction of all the bunkers in Rajouri and Poonch districts would be a daunting task. “Hopefully, MHA would understand the difficulty which we faced in start of work particularly in Rajouri and Poonch districts”, he added.
It is pertinent to mention here that Chief Secretary BVR Subrahmanyam is periodically reviewing the progress on construction of bunkers so that the facility is made available to the border dwellers in shortest possible time.