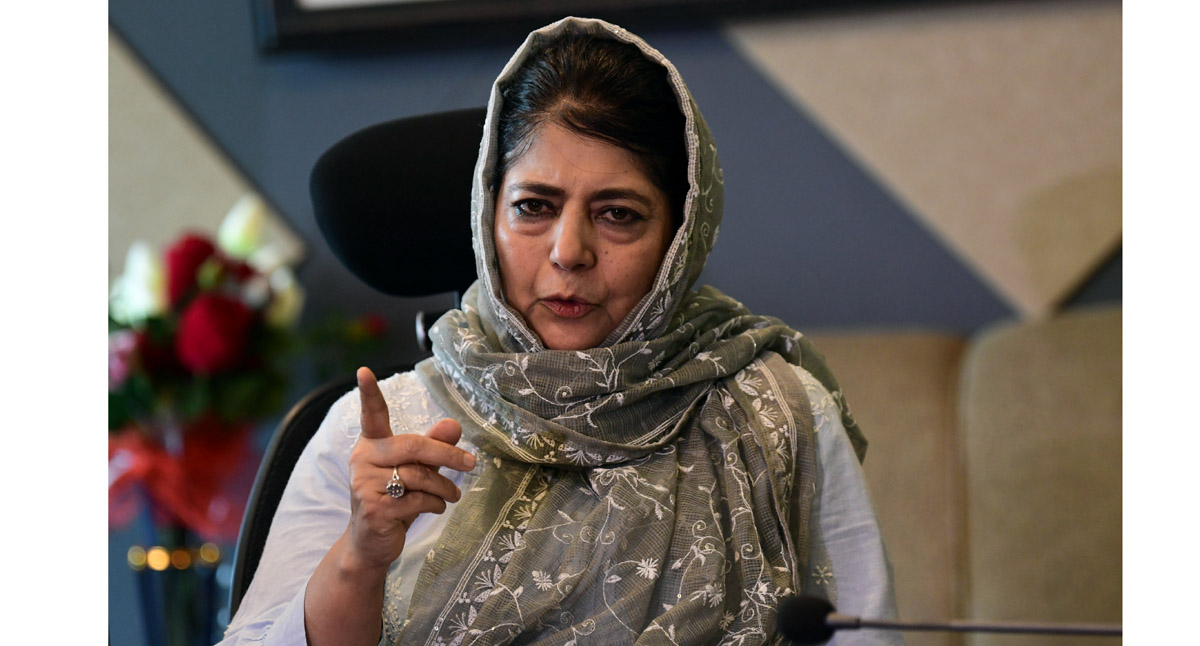 Urges Ulmas to propagate Pandits are our own
Excelsior Correspondent
Srinagar, June 25: Former Chief Minister and president of the People’s Democratic Party (PDP), Mehbooba Mufti today urged the parents to stop their children from picking up arms.
Addressing a press conference here, Mehbooba appealed to the parents to stop their children and youth from picking up guns to save the young and precious lives.
She also urged the religious leaders and scholars in the Valley to propagate through their sermons that “Kashmiri Pandits are our people so that attacks on them won’t take place.”
“Our religious leaders should make it a point to ensure that they tell people that Kashmiri Pandits are our people through their sermons,” she said, adding no attack on Kashmiri Pandits was carried out during her tenure as Chief Minister and they were paid salaries without attending their duties.
Click here to watch video
She said that the resources of J&K as well as the jobs are being put on sale while depriving the locals of their rights. “Jobs of the people of J&K are put on sale and land is prioritized and given to security forces first.”
Mehbooba said that small and big contracts are given to outsiders including the construction of two AIIMS in J&K. “The locals are being deprived while everything big goes to the outsiders,” she said.
On the Amarnath yatra, Mehbooba said that such an atmosphere has been created as if an attacker is ready to come and attack. “Kashmir is known for its hospitality and we have been hosting Amarnath pilgrims for decades. They are our guests and they will always be welcome here,” she said.
On the matter of the Government sacking the employees on corruption charges, she said her Government had also sacked corrupt officials, but, “there has to be a process to be followed before doing that”.
“Those who are buying MLAs in Maharashtra and Assam are corrupt; we have also sacked corrupt employees during our tenure, but let the court first decide if allegations against them are true,” she said, adding BJP has made a mess out of this country while the fundamentals have been turned upside down.
She also urged people to express solidarity with people who are facing the wrath of the Government on several fronts in the name of raids, terminations, etc.
“Back then I used to visit such families who were as if untouchables; when I went there, then others also started visiting; people need to do that,” she said.