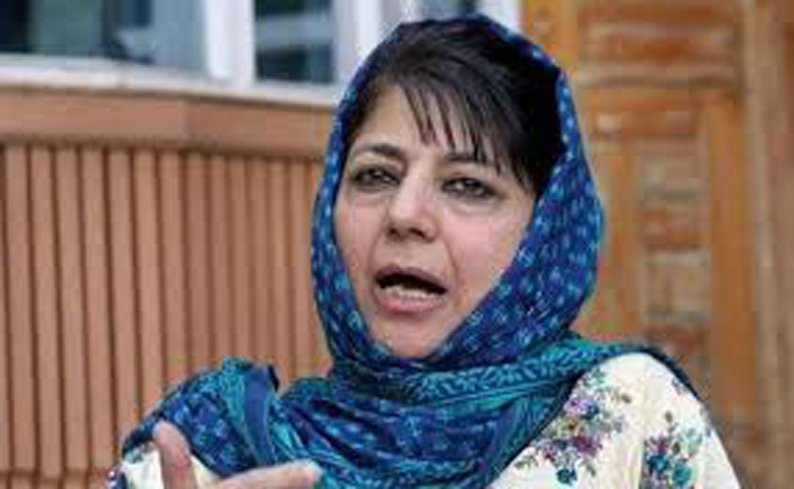 ‘Withdrawal of security from separatists may worsen situation’
Nishikant Khajuria
JAMMU, Feb 22: Former Chief Minister and PDP president Mehbooba Mufti has ruled out any possibility of an alliance with National Conference for Government formation in the State even as both the parties had recently come together on certain issues concerning Jammu and Kashmir.
“Like in recent past when we issued joint statements on defending Article 35-A and the safety of Kashmiri students, we can come together on certain issues where interest and welfare of J&K State is involved. But Government formation is no big deal and I think coming together for this is opportunism because both NC and PDP are regional parties,” she said while responding to a question during an interview on a news channel.
Reminding that PDP had joined hands with BJP because the saffron party was in power at Centre and the alliance could have helped J&K many ways , Mehbooba Mufti said coming together of NC and PDP for Government formation, however, would not resolve any such issue.
“An alliance of NC-PDP for Government formation will not resolve any such issue and I think coming together for this is opportunism as both of us are regional parties,” she added.
On the question of again entering into an alliance with BJP in future , the PDP president said that it was not even thinkable for her as experience of the same in the past was disastrous for her party. “Mufti Sahib had forged an alliance and it is not even thinkable for me because it didn’t help our party, our people and to end the violence in the State of J&K,” she stressed.
Claiming that the decision of forging alliance with BJP for Government formation after 2014 Assembly polls was taken for resolution of Kashmir problem, Mehbooba Mufti lamented that nothing such happened, which greatly disappointed her people.
“PDP could have formed Government with Congress also but we preferred Modi because of huge mandate to him and thus with a hope that he would open cross-border routes, initiate dialogue with Pakistan and resolve Kashmir issue but nothing such happened,” she said.
Terming withdrawal of security from several separatist as well as mainstream leaders in Kashmir valley as an act of vengeance and childish on part of the Government , the PDP president feared that it might worsen the situation in Kashmir.
“Government has withdrawn security of those Hurriyat and PDP leaders who talk of dialogue . So this is vengeance and that too for unarmed people who are under threat to be killed like Abdul Ghani Lone, Moulvi Farooq, Mushtaq Ahmad and others,” she said and asked if the Government wanted that more people should die.
Reiterating that war was no solution but only dialogue with the neighbouring country, the PDP president said that Pak Prime Minister Khan should also take action against Jaish-e-Mohammad outfit, which had taken responsibility for the Pulwama terror attack. “Those talking of war are just playing to the gallery. Let these politicians also go to battle fronts and then experience how much destruction is caused because of wars,” she added.
Expressing serious concern over the purported incidents of attacks on Kashmiri students and traders in other parts of the country, Mehbooba Mufti lamented that Prime Minister Narendra Modi didn’t say even a single word to condemn such attacks even as the Supreme Court has also come forward for the rescue of Kashmiris.
Fearing that the victim Kashmir students could be easily indoctrinated after their return to Valley, Mehbooba Mufti alleged that some media channels were adding fuel to the fire by inviting to their studios certain elements from Kashmir who spit venom and create more trouble for the innocent people.
Meanwhile, the PDP president also took to microblogging site and tweeted; “Congratulations to the PM on winning the Seoul Peace Prize. But Sir, back home in India we are still waiting for you to denounce the vicious attacks on Kashmiris throughout the country. But what hope does one have when even a Guv can make incendiary comments & get away it”.
“Sir the people from J&K are also your people. They have paid a heavy price and suffered immensely. What is your man ki baat on them being harassed and punished for something they are not responsible for?” she said in another tweet.