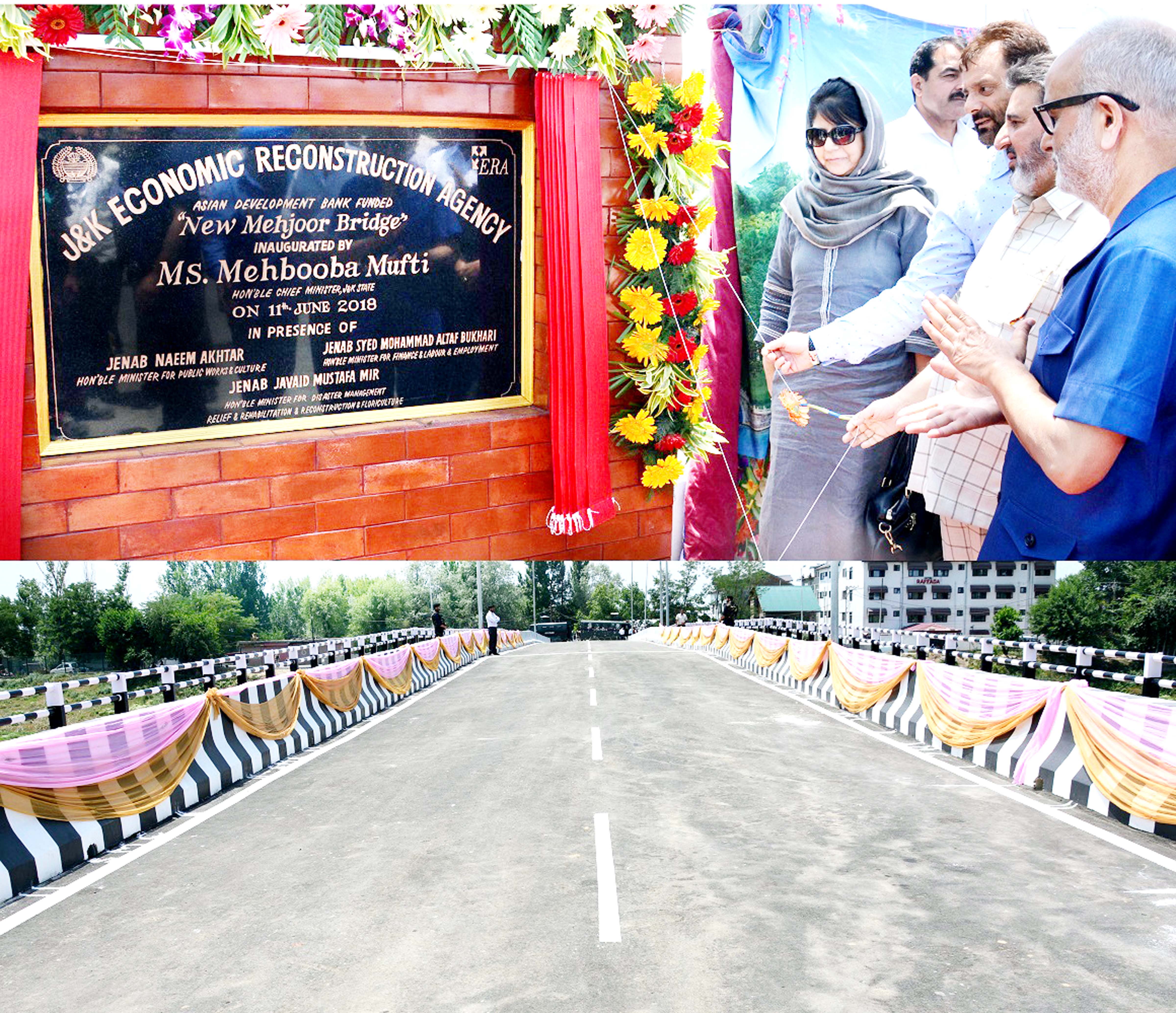 Excelsior Correspondent
SRINAGAR, June 11: Giving a major push to the traffic decongestion plan of the Government, Chief Minister, Mehbooba Mufti today inaugurated the newly constructed Mehjoor Bridge over Flood Channel on the Jawahar Nagar-Natipora-Chanapora axis here today.
Ministers Naeem Akhtar, Syed Altaf Bukhari, Javed Mustafa Mir and Asiea Naqash; legislators Noor Muhammad Bhat, Anjum Fazili and Khursheed Aalam were present on the occasion.
The bridge would help in decongesting traffic on the southern part of the city and it would also give direct and easy access from Jawahar Nagar and adjoining areas to Srinagar Railway Station and Airport. The construction of the bridge is also part of a mega road widening project from Mehjoor Nagar to Nowgam via Padshahi Bagh.
The foundation for the bridge, which has been constructed by Economic Reconstruction Agency (ERA) in record 18 months at a cost of Rs 20 crore, was laid by the Chief Minister in December 2016.
Complimenting the people of the catchment areas on the construction of the bridge, the Chief Minister hoped that it would ease the traffic movement on the Jawahar Nagar-Rambagh axis by a great measure, thereby saving the time of commuters. She assured the people that soon a fire station would be set up at Mehjoor Nagar while a proper rehabilitation plan would be formulated for people who need to be relocated in the case of widening of the road.
It may be recalled that the inauguration of Mehjoor Bridge is the second major initiative of the Government in last two months to decongest traffic in the summer capital. Last month the Chief Minister had thrown open Phase-I of the Srinagar Expressway Corridor from Amar Singh College to Barzulla bridge while as work on the Phase-II is on.
CEO, ERA, Dr. Farooq Ahmad Lone; senior officers of divisional administration, ERA and Srinagar district administration and other officers were present on the occasion.