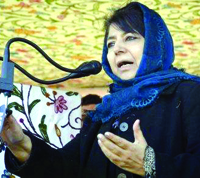 Fayaz Bukhari
SRINAGAR, Feb 18: Chief Minister, Mehbooba Mufti, today asked youth to shun violence as it will yield nothing except death and destruction.
Speaking to a public rally at Kund in Devsar in South Kashmir district of Kulgam today, Mehbooba asked against youth joining militancy as it will bring more troops and military camps to Kashmir.  “If you will pick up one gun, 1000 guns are ready to fight you back.  I came here to tell you that militancy will yield nothing. One thing will happen that Army camps will be established everywhere and it will take 100 years to remove these camps”, she said.
Click here to watch video
Appealing youth to desist from going on the path of violence, the Chief Minister said world is witness to the fact that violence has not resolved any issues rather it gives birth to many more. “Resorting to more violence leads to a response which ultimately leaves behind scars only”, she said.
Mehbooba appealed people to play their role in maintaining peace so that the process of dialogue and reconciliation is carried forward, more routes across LoC in the State are opened and people on the both sides of the divide march together on the path of growth and progress. “Give me peace. I will purse dialogue, opening of routes like Kargil-Skardu, Jam-mu-Sialkote, Nows-hehra-Jhangar etc. If there is peace I wish people on both sides would march together on the path of growth and development”, she said in her address.
She appealed youth to give peace a chance so that Government will open cross Line of Control roads like Government did in the past. “Tell your children that gun will yield nothing and lakhs of security personnel will come to fight you. Gun will snatch your land from you as well. If you give peace a chance, we will open various ways like we opened Muzaffarabad road and Rawalkote road. We will try to open such ways that one can reach Saudi Arabia in two days to perform Hajj through Iran. These things will only happen if there is peace”, she said.
The Chief Minister said the situation across the borders in the State is not encouraging with deaths and destruction being reported so frequently that there is a demand for construction of bunkers from the villagers. “This is unfortunate. In 21st century when they should be demanding better schools, good hospitals and efficient services they are asking for bunkers to protect themselves”, she said adding the people of the State continue to bear the brunt of partition and acrimony between India and Pakistan.
Mehbooba said she is pained to see that a common citizen of the State is the ultimate victim of this whole scenario of uncertainty, violence and acrimony. “It’s the people of the State alone who get killed, their businesses suffered, education affected and what not”, she said adding that recently when she went to Ajmer to pay obeisance at the Dargah of Hazrat Khawaja Moin ud Din Chishti (R.A.) she met an officer there who was all praise for the talent and intelligence of youth from the State.
Mehbooba said that the presence of the Army in the civilian areas is a problematic. “Isn’t it true to tell the Army camp to leave 15 kanals of land for the play ground. On the other side of our school is an Army camp and once the gate is closed, our girls have to face difficulties to move out from there”, she said.
Asking youth to shun violence, she said that it has yielded nothing except filling the graveyards. “In past, when there was an encounter in a village, Due to terror all the people used to left their homes. But today when there is an encounter, whole village comes and pelt stones on the encounter site. This will yield nothing. It has been 30 years to the militancy but nothing happened till date. Only our graveyards are full of people. Our daughters became widows, fathers lost their sons and children became orphans. From last 30 years, only one thing was done by the late Mufti Sayeed that Muzaffarabad road was opened”, she said.
Mehbooba said all along the agenda of her Government has been to take people of the State out of the mess of violence, initiation of consultative process in the State to sort out issues and develop Jammu and Kashmir as a modern State of the country. “Some movement on this agenda has been made”, she said, and many decisions of huge public welfare like withdrawal of cases against around 10,000 youth, regularization of 61,000 daily wagers, a massive economic and reconstruction plan etc were initiated by her Government during the last three years.