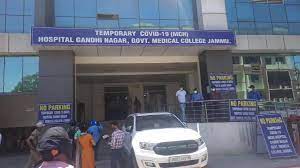 Rajiv Sharma
The 200-bedded Maternal and Child Health (MCH) Hospital, Gandhi Nagar in Jammu was established with a vision that it will share the load of Shri Maharaja Gulab Singh Hospital, Jammu which is overburdened but the MCH Gandhi Nagar defeated as even after more than two years of its establishment, it is reeling under shortage of staff and now voices are being raised from various quarters to hand over the Hospital to Health Department for its best utilization in the interest of patient care.
The three-storey building, which was a dedicated Covid Hospital, was partially opened for general services (Gynae and Pediatrics) in the month of May this year. One floor of the Hospital is still dedicated for Covid patients while in other two floors, Gynae and Pediatrics departments are running.
The Hospital is presently under the operational control of Government Medical College, Jammu. Around 350 posts including those of doctors and Gazetted as well as Non-Gazetted staff were created for smooth run of the MCH Gandhi Nagar but only 80-90 posts have been filled till date (30 on regular basis and rest on adhoc arrangement).
As a result, the purpose of establishing this Hospital i.e. lowering the burden of SMGS hospital, has failed completely. If MCH Gandhi-Nagar being 200-bedded is returned to Health Department, Maternal and Child Health (MCH) facilities can be extended in Government Hospital, Gandhi Nagar, which has only 160 beds out of which just 40 beds are dedicated to MCH.
Further, as MCH Gandhi Nagar is on the Government land which is the part of Government Hospital, Gandhi Nagar, it can be utilized best utilized by Government Hospital, Gandhi Nagar for the patient care. The over crowdedness at SMGS Hospital can be shared to a great extent if this facility is made properly functional, directly resulting in better patient care and saving precious lives. Government Hospital Gandhi Nagar is pioneer hospital in J&K in starting the DNB courses. The presence of PGs at the level of District Hospital definitely effect the patient care but due to less number of beds, the Hospital shall be deprived of getting DNB courses in other specialties whereas if the 200 beds of MCH are included, all the specialties can have DNB students which shall strengthen the existing health care system and develop a centre of excellence for patient care.
The Blood Centre has also been upgraded to Blood Component Lab at Government Hospital Gandhi Nagar. This facility shall be of great support to Government Medical College Jammu in fighting against Dengue outbreaks and other infectious diseases if 200 beds of MCH are added to the existing Gandhi Nagar Hospital.
The Emergency Resuscitation (ER) rooms are actively saving precious lives in the province but GMC Jammu is the only facility having Interventional/Emergency Medicine. If the bed strength of Government Hospital Gandhi Nagar is increased, the CATH lab can be established here for saving the precious lives.
Further, Government Hospital Gandhi Nagar has Super Specialty doctors in Gastroenterology, Cardiology, Diabetology and Gynae and Oncology. If the bed strength of the Hospital is increased, these units can be established here. If bed strength is increased, there shall be a new hope for extending Palliative Care also in the Hospital, which is the only approved Nodal Centre for Palliative Care and Centre of Research in J&K. The existing MCH Hospital is under the operational control of GMC Jammu which already is extended being an educational, clinical, research & development hub. If MCH building is handed over to Health Department, it can be run by internal arrangement which shall reduce the huge expenditure required for establishment of created posts to make it properly functional.