JAMMU Feb 3: Continuing his endeavour to provide more and better development amenities to the citizens of Jammu, Chander Mohan Gupta, Mayor Jammu Municipal Corporation (JMC) in presence of BJP general secretary (organization), Ashok Kaul, Purnima Sharma, Deputy Mayor JMC , Narotam Sharma, councillor of Ward No.3, Yudhvir Sethi vice president J&K U.T BJP, Vinay Gupta district president BJP Jammu, Parveen Kerni, Mandal president East kick started the construction work of a Community Hall within the premises of Laxmi Narayan Mandir situated at Dhakki Sarajan near Link Road Jammu of Ward No.3.
Besides , Management Committee members of the Mandir, prominent inhabitants of the Ward as well as R. K Mahajan, Executive Engineer, Vijay Kumar Koul, Assistant Executive Engineer, Shabir Ahmed, Junior Engineer and other supervisory staff of works Division -I were also present during the function which was organized in a very simple manner.
Speaking on the occasion, Mayor said that it was the long pending demand of the Mandir Management Committee as well as locals as there is no such facility in the nearby locality where inhabitants of the area may conduct religious/social functions during rainy as well as in  hot weather conditions and due to sincere efforts of the councillor of the Ward, this much needed development work has been started today by the JMC with an allotted amount of Rs 27lakh.
Deputy Mayor, JMC also spoke on the occasion and said that JMC is committed to provide sufficient funds in each ward of the city in a uniform manner for undertaking development activities from the last more than three years and also appealed to the general public to come forward and cooperate with JMC and other allied departments in all the development works.
Mayor directed the concerned Engineering Wing accompanied with him to keep strict vigil on the quality of this work started today on a routine basis and get it completed within the stipulated time frame so that locals and devotees of this historical temple situated just in the heart of old Jammu city can take full benefits of this community hall.
Mandir Management Committee members extended much gratitude to the Mayor and other dignitaries for visiting the site and fulfilling their demands on priority basis. 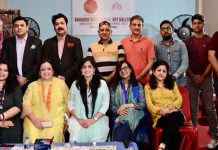