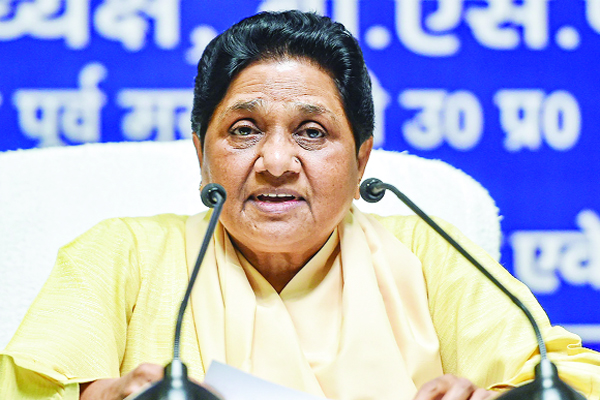 Uttar Pradesh, June 3: Amid recent targetted killings in Jammu and Kashmir, Bahujan Samaj Party (BSP) supremo Mayawati on Friday urged the central government to take strict action against the incidents and people behind such attacks.
The BSP chief noted that the recent attacks have created an atmosphere of panic in the region and called it “worrisome”.
“Innocent people are being killed every day in Jammu and Kashmir. Recently, there was a murder of a resident of Rajasthan and a bank manager, very sad and also worrying. Due to this, there is an atmosphere of panic. The central government should take strict action against such guilty elements, this demand of BSP,” Mayawati tweeted.
In a recent terror attack, a bank manager, identified as Vijay Kumar, was shot dead by terrorists in the Kulgam district of Jammu and Kashmir on Thursday. He was shot right outside his office. The incident occurred at the Ellaqie Dehati Bank at Areh Mohanpora in Kulgam. The Resistance Front, a shadow outfit of the banned Lashkar-e-Taiba terror group, claimed responsibility for the attack.
A couple of days ago, a 36-year-old Hindu woman teacher Rajni Bala, hailing from Jammu’s Samba district, was shot dead by terrorists at a government school in Gopalpora, Kulgam.
Over the last two months, two civilians – including Kashmiri Pandit employee Rahul Bhat — and three off-duty policemen were killed in Kashmir by terrorists.
Meanwhile, people belonging to the Hindu community employed in Kashmir staged a protest in Jammu and demanded security for members of their community.
Union Home Minister Amit Shah and Jammu and Kashmir Lieutenant Governor Manoj Sinha are likely to hold a high-level meeting here in the national capital on Friday over the killings of Kashmiri Pandits in the Union Territory in the last few days. (Agencies)