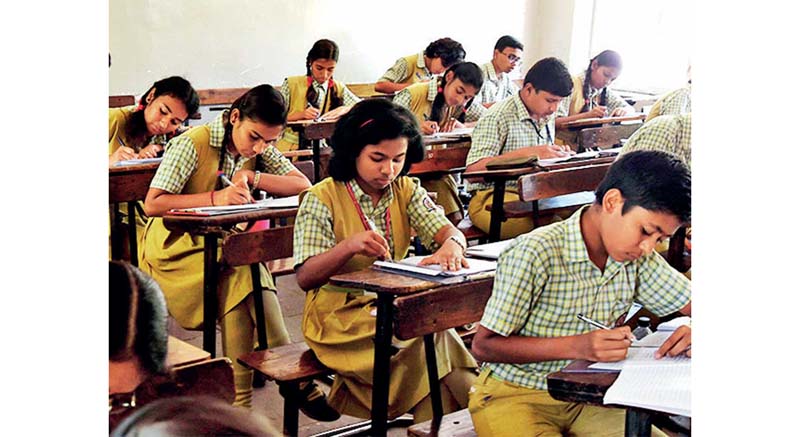 Decision on 10th, 12th depends upon situation after Apr 14

Nishikant Khajuria
JAMMU, Apr 7: In the wake of ongoing lockdown to fight COVID-19, the School Education Department today ordered mass promotion of all students up to Class 9th and those appearing in Class 11th examinations in Summer Zone of Jammu Division while any similar decision on Class 10th and 12th will depend upon the situation emerging after April 14.
Besides, Class 11 private students in Kashmir Division as well as in Winter Zone of Jammu Division, who had to appear in bi-annual exams, slated to be held during the ongoing month of April, have also been given mass promotion and thus around six lakh students are now eligible for admission in the next higher grade without qualifying the examinations.

Click here to watch video
However, the Jammu and Kashmir Board of School Education (BOSE), which conducts the examinations of Class 11th, has reserved the right to cancel the promotion of any such candidate, who is found not eligible for appearing in Class 12th examinations.
The order for mass promotion was issued today by the Department of School Education, following which the Directorate of School Education Jammu (DSEJ) and the Board of School Education issued separate orders for the students of Class Ist to 9th and 11th , respectively.
“In compliance with the approval conveyed by the administrative department in view of the countrywide lockdown in the prevailing extraordinary circumstances of the spread of COVID-19 and apprehended loss of academic time of the students, it is hereby ordered that all the students studying in classes Ist to 9th of all schools (Government as well as Private) falling under Summer Zone of Jammu Division, shall stand promoted to the next grade for the Academic Session 2020-21, as a one time exception,” read an order issued by DSEJ, Anuradha Gupta.
Further stating that the potential learners may be identified later on the basis of their performance in the examination/school assessment already held, so that required remedial teaching can be provided to them as and when regular class work resumes, the DSEJ, however, makes it clear that this shall have no bearing on their promotion to the next grade made in terms of this order.
With the issuance of this order, around 5.5 lakh students of class Ist to 9th in Summer Zone of Jammu Division have become eligible for admission in the next grade and consequent upon this mass promotion, the private schools shall not be required to get the results confirmed by the respective competent authority.
Similarly, the JKBOSE also issued a separate notification for mass promotion of the students of Class 11th Annual Regular, 2020 of Summer Zone-Jammu Division and 2019-2020 Annual- Biannual Private of Winter Zone, Jammu Division and Kashmir Division.
Pertinent to mention that the Annual Regular examination of 2020 of Class 11th for the candidates of Summer Zone Jammu Division were scheduled to be held with effect from March 20 and had been postponed as a preventive measure in view of COVID-19 pandemic while the examinations of Private fresh /failure/re-appear candidates of Class 11th (2019-2020/Annual-Biannual) belonging to Kashmir Division and Winter Zone of Jammu Division were slated to be held during this ongoing month of April.
“In view of the prevailing situation, it is apparent that the conduct of the said examinations is impossible in the near future and the delay in this regard may adversely affect the academic career of candidates who were supposed to participate in these examinations,” explains the JKBOSE while notifying mass promotion for the Class 11th students, who had been issued Roll number slips ( in Summer Zone) and those who had deposited the examination forms (Winter Zone/Kashmir Division).
However, the notification in this regard also makes it clear that the promotion of the candidates in both the divisions shall be subject to the condition that, if for any reason at any stage of time in future, it is found that any such candidate was not eligible for appearing in Class 12th examination, the BOSE reserves the right to cancel his/her promotion instantaneously without any prior notice.
Official sources told the Excelsior that for screening of such promoted candidates, the Golden Tests (Pre-final exams at school level) of Class 12th would be conducted with utmost seriousness so that only eligible students are allowed to appear in final exams.
Further, according to Principal Secretary School Education Deptt, Dr Asgar Samoon, decision on mass promotion of the students who appeared in Class 10th and 12th (Summer Zone in Jammu Division) shall depend upon the situation emerging after April 14 when the ongoing 21-day lockdown period ends.
It may be recalled that theory examinations of Class 10th had completed but External Practical exams of these students were still pending while two regular and one optional papers of Class 12th were yet to be conducted when the lockdown was imposed here in view of COVID-19 threat.
“The postponed examinations of Class 12th can be conducted within a week if the situation allows for the same while the students may continue to prepare for entrance exams till the result is declared,” said Dr Samoon and added that similarly, a little delay in declaration of Class 10th result would not be problematic for the candidates.