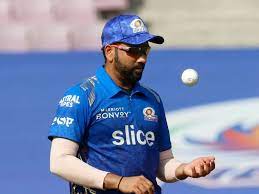 Mumbai, Apr 25:
“We haven’t put our best foot forward but that happens,” admitted Mumbai Indians captain Rohit Sharma after the record-five time IPL champions became the first team to be eliminated from the competition following its eighth loss in a row.
Mathematically, Mumbai Indians were knocked out off the play-off race after the 36-run loss to Lucknow Super Giants on Sunday.
“We haven’t put our best foot forward in this tournament but that happens, many sporting giants have gone through this phase but I love this team and its environment.
“Also want to appreciate our well wishers who’ve shown faith and undying loyalty to this team so far,” tweeted Rohit a day after their fate was sealed in the competition.
Both IPL heavyweights MI and CSK have endured tough campaigns this season though the latter remains in the competition.
At the mega auction ahead of the IPL, MI did not retain the likes of Hardik Pandya and Krunal Pandya who played a crucial role in the team’s success over the years.
Their retained players Ishan Kishan, Suryakumar Yadav, Kieron Pollard and captain himself have not performed as per expectations. (AGENCIES)