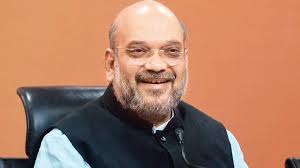 NEW DELHI, Jan 21: Ahead of his two rallies in West Bengal, BJP president Amit Shah Monday attacked Chief Minister Mamata Banerjee, saying she “ruined” the state with “politics of appeasement” and asserted his party is committed to restoring its pride.
“On my two days visit to West Bengal, I will address public meetings in Malda (on Jan 22) & Jhargram (on Jan 23). BJP, under the leadership of PM Modi, is committed to restore the pride of West Bengal, which is ruined by Mamata Didi’s politics of appeasement,” he said in a tweet.
The BJP has previously accused the state government of putting hurdles in the political programmes of its top leaders, including Shah, by denying or delaying permission for holding them.
Union minister Piyush Goyal had said Banerjee was “scared” of BJP’s growing popularity and that days of her government’s are numbered.
Shah has claimed that his party will win at least 22 of the state’s 42 Lok Sabha seats in the general election. It had won only two seats in 2014.(PTI)