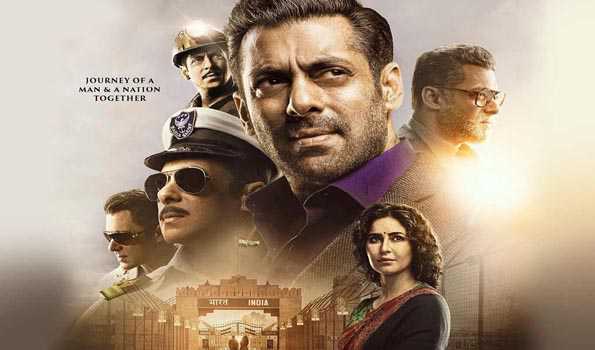 NEW DELHI: The makers on Monday released the trailer of Salman Khan starrer ‘Bharat’.
‘Bharat’ is in the eye of all the attention from Salman’s fans, from the various posters that have given some vibrant looks of the star to the sneak peeks, until now.
The extent of his looks spans from a young biker to grey-bearded adult. ‘Bharat’ trailer has everything packed to the brim of excitement–emotions, historic moments, action sequences and Salman Khan’s starry touch.
Salman Khan shared the trailer on social media saying,”‘Journey of a man and a nation together’
#BharatTrailer OUT NOW @Bharat_TheFilm @aliabbaszafar @atulreellife @itsBhushanKumar #KatrinaKaif #Tabu @bindasbhidu @DishPatani @WhoSunilGrover @nikhilnamit @reellifeprodn @SKFilmsOfficial @TSeries”.
The trailer is sure to leave you breathless with so much to watch in just over three minutes. Salman Khan has got the perfect Eid gift planned for his fans and the trailer is the testimony with its enormous depiction of the film.
‘Bharat’ will trace the journey of a man spanning six decades, hence, Salman Khan will be seen sporting six varied looks through the years of his life.
Including stellar performers like Salman Khan, Katrina Kaif, Disha Patani, Tabu, and Sunil Grover, the Ali Abbas Zafar directorial boasts of an ensemble cast promising power-packed performances.
Directed by Ali Abbas Zafar, ‘Bharat’ is produced by Atul Agnihotri’s Reel Life Production Pvt. Ltd and Bhushan Kumar’s T-Series releasing Eid, 2019.
(AGENCIES)