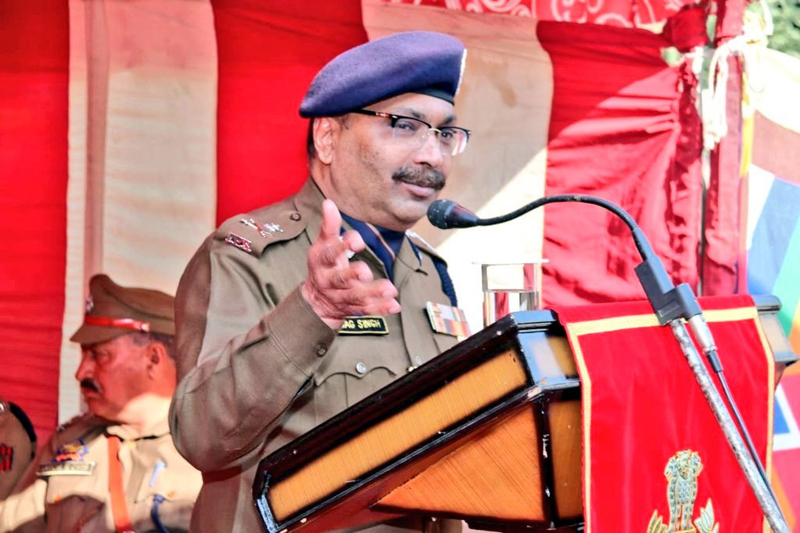 Excelsior Correspondent
JAMMU, Dec 28: Director General of Police (DGP) Dilbag Singh said today that situation was better than what it was earlier in Kashmir as Jammu and Kashmir Police and security forces have achieved lot of successes on operational front killing about 250 militants this year and destroying their support structure.
Speaking to media persons in Kathua after inspecting Police Training School (PTS) Kathua and IRP 19th battalion headquarters at Changran this afternoon, Dilbag said all security agencies were operating in coordination with each other, inflicting heavy losses on the militants and their over ground network in Kashmir.
“Situation is better than what it was earlier in Kashmir. It has improved a lot. On operational front, we have achieved many successes. Nearly 250 militants have been killed this year and support structure of the militants has been destroyed,” the State police chief said.
He declared that situation will further improve in the coming days.

Asserting that civilian and police killings have considerably gone down in the Valley, Dilbag Singh pointed out that earlier many lives were being lost on this front.
“All security agencies are operating in coordination and militants have been on the run due to coordinated operations and Intelligence-based operations being conducted by Jammu and Kashmir Police, Army and paramilitary forces etc,” he said, adding that the militants have been suffering heavy losses in the Valley at the hands of security forces.
“Not only we have killed huge number of militants but we have also managed to destroy their support structure as well,” he asserted.
Dilbag said collateral damage and civilian killings at the site of encounters have been minimized as it was always endeavor of police and security agencies to ensure minimum damages at the site of encounters. In this connection, he added that the civilians were being repeatedly asked by police and security agencies to keep away from the site of gun battles till the area is completely sanitized.
“We regret the loss of civilian lives, where it was avoidable but we can’t do anything about unavoidable losses,” he said, adding that police was always trying to ensure that the militants surrender even if an encounter has begun. “We give every chance to militants to come out and surrender. Even, we try to nab a militant running after throwing a grenade instead of eliminating him”.
Dilbag Singh disclosed that number of youth, who were planning to join militancy have been counseled and restored to their parents. “We want youth to be engaged in constructive work to strengthen peace in the State”.
The Director General of Police noted that Prime Minister Narendra Modi was all praise for Jammu and Kashmir Police during the recent DGPs/IGPs conference in Gujarat.
“Such a recognition from the Prime Minister is a great honour for all ranks of Jammu and Kashmir Police,” he asserted.
In his address at PTS Kathua, the DGP advised the trainees to make best use of the available facilities and get trained in handling the law and order, militancy incidents as well as cyber crimes involving technology.
He also impressed upon the trainees to learn languages, culture, customs and traditions of other regions which will help in developing a fellow feeling and will help in filling the gaps in our society. The DGP emphasized upon them to inculcate a spirit of courage to face the challenges with smile.
Principal PTS Kathua Arun Gupta gave a brief resume of the outdoor and indoor trainings being imparted to the trainees. He also said that the trainings in computer and Urdu language will be started shortly.
Later, the DGP interacted with the Executive and Armed police personnel at DPL Kathua. After inspecting the guard of honour, Incharge SP Kathua Nasir Ahmed Khan welcomed the DGP and gave a brief resume of the working of his district.
The DGP complimented police personnel for peaceful Panchayat and Urban Local Bodies election and impressed upon them to be ready for the future challenges.
Dilbag impressed upon the officers and the jawans to strictly deal with the bad elements in the society but give respect and protection to the law abiding people.
He announced a cash reward of Rs 5000 in favour of SgCT Gharjit Singh for wining a bronze medal in power lifting championship at Pune, Maharashtra.
Earlier, the DGP visited the battalion headquarter of IRP 19th at Changran where he planted a tree and also interacted with newly elected Sarpanches and the police personnel there.
The DGP was received by the Commandant of IRP 19th battalion Shiv Kumar Sharma.
Among others, DIG JSK Range Vivek Gupta, AIG (Policy & Training) Sameer Rekhi, AIG (Welfare/Comm), Manoj Pandita, SP Traffic Rural Jammu Mushtaq Choudhary and other senior officers were present.