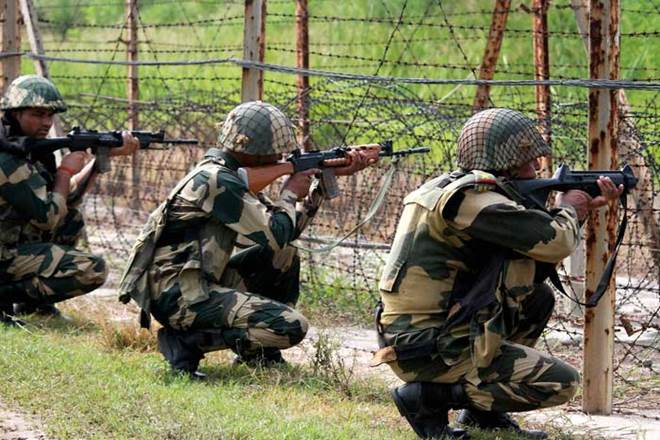 Excelsior Correspondent
JAMMU, Jan 10: An Army Major and a BSF Head Constable were injured in ceasefire violations by Pakistan army along the Line of Control (LoC) in Manjakote sector of Rajouri district while the enemy troops also resorted to shelling and firing in forward villages of Poonch sector today.
There was no let up in ceasefire violations by the Pakistani troops along LoC in twin border districts of Rajouri and Poonch, official sources told the Excelsior.
Pakistani troops resorted to heavy firing and shelling in Tarkundi forward area of Manjakote sector in Rajouri district this afternoon in which an Army Major and a Border Security Force (BSF) Head Constable were injured.
The Indian side retaliated effectively, leading to heavy exchanges. Reports said Pakistan side also suffered extensive damages in retaliatory firing by the Indian side. However, exact losses of the Pakistan side couldn’t be ascertained immediately.
Injured have been identified as Major Yadavendra and BSF Head Constable Mumtaz Ali. They have been hospitalized.
Pakistani troops this evening also violated ceasefire in Digwar and Malti sectors of Poonch.
The year 2018 witnessed the highest number of ceasefire violations — 2,936 — by Pakistan troops in the last 15 years along the Indo-Pak border.
On Wednesday as well, Pakistani troops had fired on and shelled the Kalal forward area in Nowshera sector of Rajouri district twice..
The continuous shelling and firing on villages has set in a fear psychosis among the border dwellers.
With the latest incident, Pakistani troops resorted to firing and shelling along the LoC in Poonch seven of first 10 days of the new year.
The Pakistani army fired on forward posts along the LoC in Poonch district on Tuesday as well.