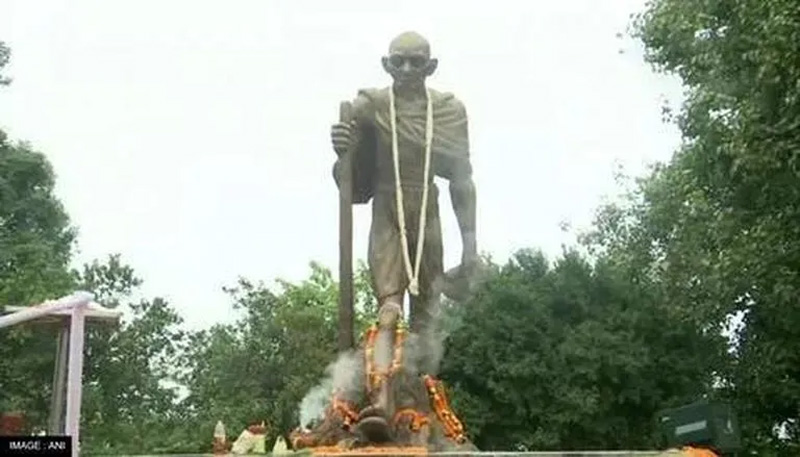 UNITED NATIONS, Nov 27:
A bust of Mahatma Gandhi will be inaugurated as a gift from India to the United Nations during India’s Presidency of the Security Council next month, the first sculpture of the Mahatma to be installed at the world body’s headquarters here.
The bust, made by renowned Indian sculptor Padma Shree awardee Ram Sutar, who has also designed the ‘Statue of Unity’ in Gujarat, will be inaugurated on December 14 during External Affairs Minister S Jaishankar’s visit to the UN for India’s Presidency of the Council for the month.
India’s Permanent Representative to the UN Ambassador Ruchira Kamboj told PTI in an exclusive interview here that the bust will be placed in the expansive North Lawns of the UN headquarters.
The bust, a gift from India, will be the first Gandhi sculpture that will be installed in the UN headquarters, which proudly displays gifts and artifacts from around the world.
Notable works of art at the UNHQ include a section of the Berlin wall donated by Germany, Soviet sculpture ‘Let us Beat Swords into Ploughshares’, life-size bronze statue of Nelson Mandela gifted by South Africa and the ‘Guernica’ tapestry after the painting Guernica by Pablo Picasso.
The only other gift from India on display at the UN Headquarters is an 11th century black-stone statue of ‘Surya’, the Sun God, donated on July 26, 1982.
The statue, dating from the late Pala period and which is currently displayed in the Conference Building, was presented as a gift by then Prime Minister late Indira Gandhi to the UN.
Then Secretary-General Javier Perez de Cuellar had accepted the sculpture on behalf of the United Nations.
Kamboj said the Gandhi bust will be placed in the North Lawn, a “very prestigious location” in the UNHQ grounds.
The bust will be inaugurated on the morning of December 14 and the ceremony is expected to be attended by all 15 Security Council members as well as the incoming five new members who will take their seats on the Council beginning January 1, 2023.
UN Secretary General AntonIo Guterres and President of the 77th session of the UN General Assembly Csaba Korösi could also be present on the occasion.
Underlining the significance of the event, Kamboj said Mahatma Gandhi’s legacy of non-violence and peace is enduring and Prime Minister Narendra Modi’s statement that “this is not an era of war” speaks to that very legacy and has been widely accepted by the world.
During Jaishankar’s “action-packed” visit to the UN next month, India will also be launching the ‘Group of Friends on Peacekeepers’.
India will be a co-chair of the group along with key Troop Contributing Countries and will continue to spotlight the focus on accountability for crimes against peacekeepers.
India had highlighted peacekeeping as one of the priority areas during its Presidency of the Council in August 2021, when the Council had unanimously adopted for the first time a resolution on ensuring accountability for crimes committed against UN peacekeepers besides calling on member states hosting peacekeeping operations to bring to justice perpetrators responsible for killing and committing acts of violence against the Blue Helmets.
“The Group of Friends will carry the discussion further forward,” Kamboj said.
During Jaishankar’s visit, India will also highlight millets as the year 2023 has been designated as the ‘International Year of Millets’ after a proposal for the same was brought forward by the Government of India and endorsed by Members of FAO Governing Bodies, as well as by the 75th Session of the UN General Assembly. (PTI)