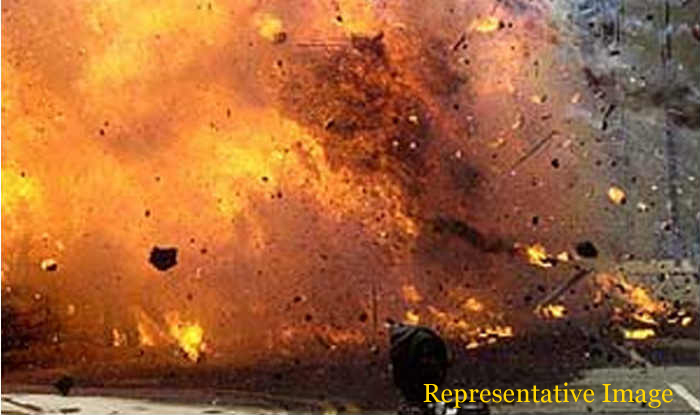 CHANDIGARH, Dec 25:  Punjab DGP Siddharth Chattopadhyaya today said the dismissed head constable killed in the Ludhiana court blast had links with Khalistani elements and terror outfits, and some Pakistan-based entities could be behind the incident.
The DGP told reporters Gagandeep Singh (31), who was dismissed from service in 2019, had gone to the washroom of the courts complex to assemble the bomb and plant it somewhere.

Click here to watch video
He was alone in the washroom when the bomb went off.
Gagandeep was posted as a “munshi” at a Police Station in Khanna, his native place, and was sacked in connection with a drug case, Chattopadhyaya said.
He was arrested by the anti-drug special task force for carrying 385 gm of heroin and booked under the Narcotic Drugs and Psychotropic Substances (NDPS) Act in 2019.
He spent two years in jail and was currently out on bail. The next hearing in the case was scheduled for December 24, a day after the blast, the officer said.
During his time in jail, he probably came in contact with some bad elements, police said.
Citing the initial probe, Chattopadhyaya said Gagandeep had links with Khalistani elements, both within Punjab and abroad, terror outfits, mafia groups as well as narcotic smugglers.
He said further details will be disclosed later.
To a question about Pakistan’s involvement in the blast, the DGP said police have “full suspicion” but he could not say so conclusively.
The leads gathered so far indicate that someone sitting and operating in Pakistan could be behind it, he added.
Asked if Pakistan-based pro-Khalistani organisations could have had a role in the blast, Chattopadhyaya said there were indications of links to Khalistani elements and narco-terrorism.
Gagandeep was facing a narcotics case and his link with the mafia was also established, he said. The DGP said the explosive used in the blast was the kind that only terrorists have and it might have come from across the border.
He said the blast was the biggest example of the “dangerous cocktail” of terrorism, organised crime, mafia and narcotics.
Asked if RDX was used in the bomb, Chattopadhyaya said the material has been sent for examination and the type of explosive used will be known after the report comes.
“I cannot say conclusively what the (explosive) material was,” he said, adding that it was unlikely to be RDX.
Replying to another question, the DGP said Gagandeep was “technically sound” when he was serving in the police.
“He was very good with computers and technical material,” he said.
Ruling out the human bomb angle, Chattopadhyaya said, “It appears that he went there (washroom) to connect some wires and to place it (the bomb) somewhere. It was not the concept of a human bomb.”
“The posture in which he was sitting, he did not go to the washroom to use it. He was using the washroom to assemble it . He was alone there,” the officer said.
Chattopadhyaya said during the course of the post-mortem, police were able to identify him from his tattoo mark on the right arm.
Separately, the DNA samples of the body were also collected, he added.
According to Gagandeep’s wife Jaspreet Kaur, her husband had left home around 9.30 am on the day of the blast and his mobile phone was switched off ever since.
She recognised the tattoo mark on the arm of Gagandeep and the apparel worn by him.
Referring to the alleged sacrilege bid at the Golden Temple in Amritsar, the DGP said a case of sacrilege had been registered and an SIT led by a DCP is investigating the matter.
The SIT will submit its report shortly, he said.
He said that the man who was beaten to death for his alleged sacrilege bid had not been identified yet.
Regarding another such incident in Kapurthala, the DGP said it did not turn out to be a case of desecration and the man, who was mercilessly beaten to death, probably entered the gurdwara with the intention of theft.
He said a murder case has been registered in this regard.
To a question related to registration of a case against Akali leader Bikram Singh Majithia under the NDPS Act, the DGP said the law will take its own course.
On upcoming Assembly elections, the DGP said efforts of police were to ensure free, fair and peaceful polls. (PTI)