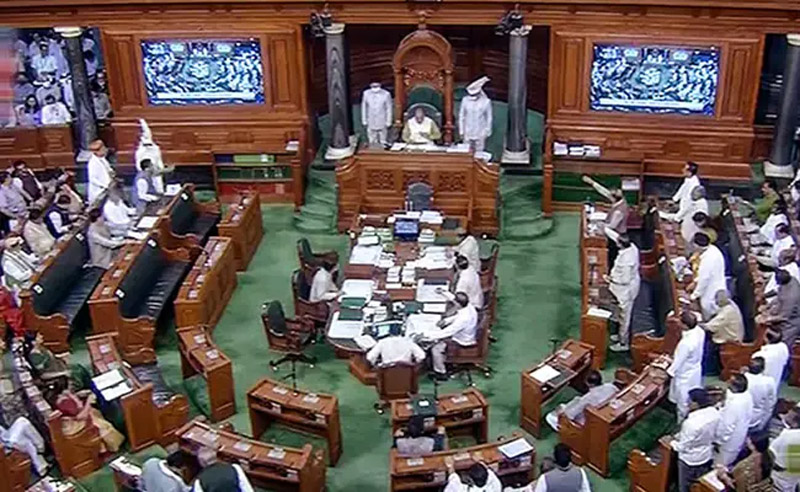 Lok Sabha proceedings were adjourned for the day on Thursday following a request from the government that the Indian Antarctic Bill, 2022 be taken up for consideration when Opposition members are also present in the House.
After the House reassembled at 2:15 PM following a routine adjournment, Union minister Jitendra Singh said his request is that the bill be taken up for consideration only when Opposition members are present as it is an important legislation.
Several Opposition members were not present in the House with many of them protesting outside over Congress president Sonia Gandhi’s questioning by the Enforcement Directorate in the National Herald money laundering case.
The chair, Bhartruhari Mahtab, took the sense of the House noting that the presence of Opposition was negligible, and adjourned the proceedings for the day.
The bill seeks to give effect to the Antarctic Treaty, the Convention on Conservation of Antarctic Marine Living Resources and the protocol on Environmental Protection to the Antarctic Treaty.
It also seeks to protect the Antarctic environment and regulate activities in the region.
Earlier, Lok Sabha proceedings were adjourned briefly as Opposition parties voiced their protest against rising prices and the ED summons to Gandhi.
The Congress and other Opposition parties sought to raise the issues as soon as the House convened for the day and began shouting slogans. Many members trooped into the Well of the House displaying placards even as Question Hour started.
Speaker Om Birla adjourned the House for a brief period. Proceedings resumed around 11.30 am with Congress members staying away and DMK members staging a walk out.
Earlier, Union minister Pralhad Joshi asked whether the Opposition party believes everyone is equal before the law or not.
“Is she some ‘super human’ because she is the Congress president?”
The Parliamentary Affairs minister also said Opposition parties wanted to discuss the issue of price rise in the House and the government was ready for it.
“Once the health of Finance Minister Nirmala Sitharaman is fine, the discussion can be taken up,” the minister said.
Amid the din, a question related to installation of solar power panels was taken up during the Question Hour that went on for just about 10 minutes.
The speaker told the protesting members that issues can be raised after the Question Hour. However, as the ruckus continued, the proceedings were adjourned till 11.30 am.
Some Congress members displayed placards with the words “Satyameva Jayate” and a photograph of Sonia Gandhi.
Opposition parties also protested against price rise. They have been protesting against the government over price rise, levying of GST on certain daily use items and other issues since the Monsoon Session of Parliament started on July 18. (PTI)