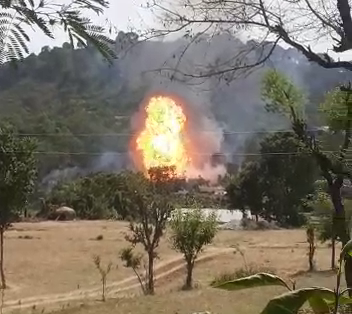 JAMMU: Panic gripped the local residents when nearly six LPG cylinders exploded as truck loaded with them caught fire on Friday near Tikri on Jammu-Srinagar National Highway in Udhampur district.

Police here said that the truck loaded with LPG cylinders this afternoon caught fire near Tikri.

“The driver had a miraculous escape when the truck caught fire and the LPG cylinders started exploding,” police added.

They said that around 5 to 6 cylinders exploded in the fire. The locals and police rushed to the spot but due to cylinders loaded in the truck, immediate action could not set into motion.

“The traffic was stopped on the highway,” police said adding that more details were awaited. (AGENCIES)