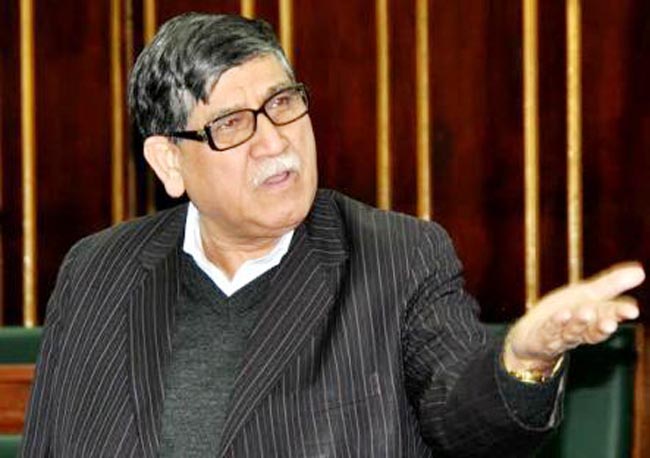 Fayaz Bukhari
Srinagar, Mar 24: Former Speaker of Assembly and Parliamentary candidate of National Conference for North Kashmir’s Baramulla constituency, Mohammad Akbar Lone, today said “long live Pakistan” while addressing a rally in North Kashmir.
Lone said that he had raised long live Pakistan on the floor of the House in response to the members of the RSS (BJP) in the Assembly when they were raising down with Pakistan slogans.
“In the Assembly, the RSS (BJP) was saying Pakistan Murdabad, Pakistan Murdabad; I replied back Pakistan Zindabad, Pakistan Zindabad. I was not afraid. When I came out, I was asked by the media persons, did you say Pakistan Zindabad and I told them that yet I said it and said it deliberately”, said Lone while addressing a rally.

The NC leader said that if someone abuses Pakistan once, he will abuse that person 10 times. “Our friendship with them should grow and friendship between India and Pakistan should grow. If someone abuses it once I will abuse him 10 times”, he said.
Lone said he wants progress and prosperity of Pakistan. “The country across is Pakistan and they are my Muslim brothers, they should prosperous and progress”, he said.
He said that Congress is more dangerous than BJP. He said PDP boosted BJP and they are helping them now in Jammu. He said that there is no friendly contest between Congress and NC.
Congress is more dangerous than BJP and we have tough contest with Congress than BJP.
Terming Farooq Abdullah’s announcement as ‘political’, Lone said that he (Farooq Abdullah) used the term ‘friendly contest’ in political sense as there is no such contest on ground.
Meanwhile, the Congress has filded its Kupwara district president as its candidate for Baramulla Parliamentary constituency against National Conference veteran and former Speaker of Assembly, Mohammad Akbar Lone.
Congress has decided not to field Salman Soz from Baramulla as was speculated. They instead are fielding a relatively weak candidate owing to “friendly contest” with the NC.
The party high command in consultation with local party leadership have decided to field district president Kupwara Farooq Ahamad Mir from Baramulla.
Mir is likely to file his nomination tomorrow. Meanwhile, party may field GA Mir or Gulzar Ahmad from South Kashmir, again a weak candidate against former Chief Minister and PDP candidate Mehbooba Mufti.