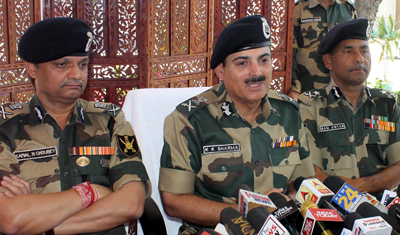 JAMMU, Mar 30: The Border Security Force (BSF) chief KK Sharma today didn’t rule out  “limited confrontation’’ again with Pakistan on the International Border (IB) in Jammu region in the month of April saying the BSF don’t want this (any such confrontation) but it has been observed over last few years that Pakistan starts ceasefire violations when the harvest season is over.

Sharma, who was here on two-day visit to review operational preparedness of the BSF along 198-kilometer long International Border in Jammu region spread over three districts of Jammu, Samba and Kathua, said there have been large number of militants present on the launch pads on Pakistan side of the IB and they could try to infiltrate.

Speaking to reporters after visiting Hiranagar sector in Kathua district where he reviewed the work on smart fencing being laid as pilot projects in two patches of five kilometers each, Sharma maintained that many infiltration bids have been foiled during the lull after two-month long ceasefire violation by Pakistan along the IB.

Pakistan violated the ceasefire along the LoC and the International Border in Jammu and Kashmir 633 times in the first two months of this year in which 10 security personnel and 12 civilians were killed.

“We anticipate that immediately after the crops are cut and the harvesting season is over in April, we may have a limited confrontation with Pakistan once again (in the form of ceasefire violations)”, the BSF Director General said while replying to a question as to when this lull after two-months long ceasefire violations on the IB in January this year, will end.

He said that every-year there has been limited engagement with Pakistan in April after crops are harvested. “We wish that this confrontation shouldn’t take place but we have to be prepared as Pakistan has been indulging in ceasefire violations this time around during the past few years”, he said.

Replying to another question about movement of the terrorists kept in launching pads on Pakistan side to infiltrate into Jammu,, the BSF chief said: “we have been getting information regularly that there are training camps and launching pads across the border—both IB and LoC”.

He said keeping that information in mind, the BSF is taking all possible measures so that the infiltration bids do not succeed.

“It is an open secret that Pakistani Rangers and army are helping the militants (in camping at launching pads and then infiltration attempts). “They deny it on international forums. But such activity (infiltration) cannot take place without the active support of the Rangers and Pakistan army”, Sharma said.

He said that there have been number of infiltration attempts along IB (during past three months of this year).

“We have spotted the number of militant groups coming closer to IB. As our security forces have been maintaining very high alert on the International Border, the militants have not succeeded in entering into this side and have retreated”, Sharma said.

Meanwhile, the BSF chief tried to distance from infiltration of a group of militants along LoC in Sunderbani belt of Rajouri district saying that area falls under the operational control of Army.

A group of 4 terrorists had entered into Sunderbani sector from LoC and were being followed through during combing and search operations before being neutralized on March 28 in a joint operation conducted by Army, BSF and Jammu and Kashmir Police.

“We have not allowed even a single infiltration along IB”, he maintained.

Sharma identified that the group of four terrorists killed in Sunderbani encounter belonged to Lashkar-e-Toiba (LeT) and said that BSF headquarters in Sunderbani in Rajouri district was their target.

He said that it was his organization that provided exact intelligence input to eliminate the terrorists.

“As of now, there were only four militants belonging to LeT (Lashkar-e-Toiba). There can be splinter groups of it as well. I can’t rule it out. We have kept highest level of alertness from our side”, Sharma said

The DG BSF said: “We had Intelligence inputs about the presence of militants earlier with us. That is why, the level of security and alertness around out security installation and establishments was on highest level”.

He said that BSF got specific reports and on BSF’s  local input, police, Army and other security forces laid off the cordoned and isolated them in riverine area and eliminated them without any collateral damage. “There was no loss to the security forces. The operation was successfully completed”, he added.

“These terrorists were close to the Sunderbani based BSF headquarters and there could have been an untoward incident if they hadn’t been eliminated well in time”, he said.

Replying to question about the terrorists’ target, Sharma said that BSF establishment could have been target as it was close. “The militants, who have first view of any security establishment, that becomes the target. BSF was very close”, he added.

The BSF chief said that the BSF jawans were maintaining highest degree of alertness and that is why they (the fidayeens) were not successful. There attempt will always be to cause human loss to security forces and BSF is prepared to meet any challenge fully, he added.

Asked as to why terrorists failed to carry out attack against a security establishment, Sharma said they (terrorists) may have some error in their planning and lack of support from local population.

“They might not have been able to get the local guide and that is why they kept on roaming. There was something wrong in their planning”, he added.

The security forces did very well by eliminating them with their alertness, he added.

In the first phase, the CIBMS is being undertaken at two different stretches as a pilot project while in the second phase it would be covering the entire IB of Jammu Frontier.

Yesterday, the DG BSF addressed a Sainik Sammelan at the Frontier Headquarters in which he met the jawans and praised their dedication towards the safeguarding of International Border. The motivated Border men met with their chief with full enthusiasm and zeal.

The DG was particularly appreciative of specific intelligence provided by BSF regarding the location of the terrorists in Sunderbani which resulted into elimination of the 4 terrorists by the security forces in a very clean and successful operation.

After the Sainik Sammelan, the DG visited Sunderbani and forward LC area of Rajouri before leaving for Frontier Headquarters of BSF in Srinagar.

The visit of DG was aimed at reviewing the operational preparedness of BSF on borders and to see the progress of the infrastructure which is coming up at the borders as well as the Headquarters.