Excelsior Correspondent
SRINAGAR, July 7: Police today filed charge sheet in the killing of three youth by Lashkar-e-Toiba (LeT) militants in April this year.
Militants of LeT killed three youth – Irfan Ahmad Sheikh alias Asif Sheikh, son of Ali Mohammad Sheikh, a resident of Syed Kareem, Baramulla, Mohammad Asgar Sheikh alias Afsar Khan, son of Mushtaq Ahmad Sheikh, a resident of Kakar Hamam, Baramulla and Haseeb Nabi Khan, son of Ghulam Nabi Khan, a resident of Kakar Hamam, Baramulla- on April 30 this year.
A police spokesman said that the charge sheet was filed in the Court of Principal District and Sessions Judge Baramulla against four LeT militants, among which two have been arrested while two other are still at large. Four accomplices who abetted in the commission of terror crime have also been arrested and charge sheeted in the case.
“The weapons including two AK series rifles and one pistol used in the commission of crime have also been produced before the court. The copy of opinion from Forensic Science Laboratory confirming that bullets recovered on scene of crime have been fired by same weapons have also been appended in the charge sheet along the other oral and scientific evidence including the vehicle used in the commission of crime,” he said
The spokesman said that the Special Investigation Team of Baramulla police headed by DySP Headquarters Baramulla has investigated the case making all out efforts to gather the evidence against the culprits involved in the crime.
“Those charge sheeted include three militants of LeT namely Aijaz Gojri, Bilal Najar and Shoaib Akhoon. Shoaib Akhoon is, however, still at large. Rest of the militants and their abettors stand arrested and produced before the court,” he added. 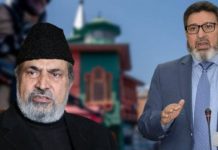