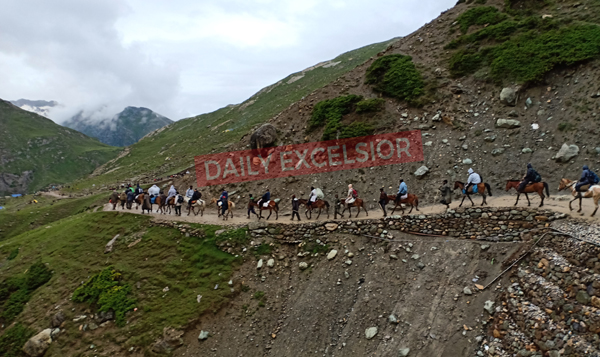 Fayaz Bukhari
SRINAGAR, Aug 4:  Five militants including top commander of Lashkar-e-Toiba (LeT) were killed in an overnight gun battle in Shopian district of South Kashmir today while a civilian was killed and two dozen injured in clashes that followed the encounter.
Army’s 44 RR, Special Operations Group (SOG) of Jammu and Kashmir Police and 14 Battalion of Central Reserve Police Force (CRPF) cordoned off village Kiloora in Shopian district of South Kashmir after inputs that a group of 11 militants including top commanders  like Zeenat-Ul-Islam and Naveed Jatt are hiding in the village.

Click here to watch video
During searches of the village, militants fired on the troops from an orchard and security forces fired back killing one militant identified as LeT commander Umer Nazir Malik son of Nazir Ahamd Malik of Malikgund Shopian. He was involved in killings and weapon snatching in the area.
The operation continued till morning and four dead bodies were recovered during the searches of the orchard. The slain militants have been identified as Waqar Ahmad Sheikh son of Mohammad Aslam Sheikh of Malikgund, Shopian. He was associated with LeT and had joined militancy two weeks ago  Aijaz Ahmad Pala son of Abdul Rashid Pala of Losdanew Shopian. He was also associated with LeT and was active since May this year. Arshid Ahmad Khan son of Abdul Rashid Khan of Ganawpora Shopian. He was associated with LeT and was active since April this year. Arif Ahmad Mir son of Abdul Rehman Mir of Yaned Pahalgam and he had joined militancy last month only.
A civilian was killed and two dozen others injured in clashes as protesters pelted stones on the security forces at the encounter site.

In Ganowpora, a civilian was killed and two others injured after Army opened fire on protesters who pelted them with stones. The protesters pelted stones on Army men soon after the funeral prayers of slain militant Arshad Ahmad.
The deceased youth has been identified as Bilal Ahmad Khan, 24. At least nine injured civilians have been referred to Srinagar for specialised treatment.
A Defence spokesman in Srinagar said that the civilian died in cross-fire. “At around 1500 hours today, Army troops came under fire from militants near Ganawpura orchards. Army troops immediately retaliated. In the cross-fire, one civilian unfortunately got injured, who later succumbed to the injury,” he said.
The spokesman said that Army killed five militants in a joint operation at Kiloora village in Shopian district of South Kashmir.
Meanwhile, the most wanted militant commander of LeT, Naveed Jatt, who fled from police custody early this year, made an appearance at the funeral of Waqar Ahmad Sheikh in Shopian’s Malikgund village.
Jatt escaped from police custody on February 6 while he was being taken to Shri Maharaja Hari Singh Hospital here for a medical examination. Two policemen were killed in a shootout at the hospital.
Jatt along with two other militants of LeT are accused involved in the killing of senior journalist Shujaat Bukhari who was shot dead outside his office in Pratap Park area of Srinagar on June 14 by three gun men. However, LeT denied involvement in Shujaat’s killing.
This is second public appearance of Jatt since he escaped from custody and first since Shujaat’s killing. Security forces have already launched massive operations against Jatt after Shujaat’s killing but he continued to be at large.