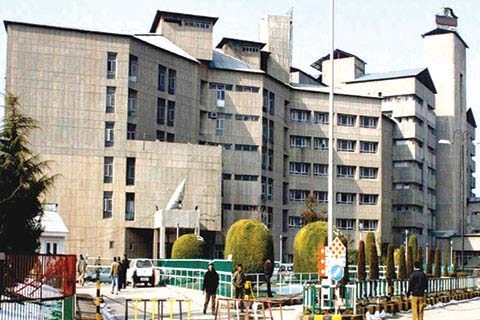 Irfan Tramboo
Srinagar, July 18: This year while Sher-e-Kashmir Institute of Medical Sciences, Soura (SKIMS) will be applying to get MCI recognition for its Gynaecology Department for the third consecutive time, it is going to be the last and final chance for them to get it done, failing which they won’t be eligible next time.
While the fate of recognition hangs in balance, the careers of scores of medical students is full of uncertainty as they are still unable to apply for the fellowship programmes being offered by national and international universities.
A point in case being the Post Doctoral Fellowship programme in Reproductive Medicine being offered by Rajiv Gandhi University of Health Sciences, which requires a candidate to have an MD/ MS in Gynaecology from an institution recognized by the MCI. However, the MDs from SKIMS, Soura are unable to apply for the same as the department is yet to be recognized by the MCI.
Scores of such aspirants told Excelsior that their careers have been jeopardized as the institution was not making any efforts to get the department recognized in time so that their degrees could have some value.
“What is the use of our degrees if we are not able to go for higher studies, these degrees are just pieces of paper with no use,” a doctor who has done his MD in Gynaecology from SKIMS said.
SKIMS has been struggling to get the department recognized for the last several years. However, every time registration was denied to them by the MCI as they lacked prerequisite infrastructure and other requirements in the department of Gynaecology.
Previously, SKIMS has attempted twice for the MCI recognition, but, this time over, it will be using its last chance, which is third and is also called a mercy chance, after which the recognition will be a distant dream.
Medical Superintendent, Maternity Hospital, SKIMS and Assistant Professor Hospital Administration Dr Haroon Rashid told Excelsior that they are putting all the things in place and will be applying for the recognition afresh for the last time in the next 20 days or so.
“We are done with electrical changes and the mechanical changes are being done. The structural changes that were directed by the MCI have been carried out, plus, the requirement of equipments has also been fulfilled,” he said.
Director SKIMS Dr Omar Javed Shah also told Excelsior that they are going to meet the set target this time and that they are expecting good results ‘soon’.
Dr Haroon hoped that the department will be recognized in next 2-3 months, after which the MDs will be able to go for higher studies.