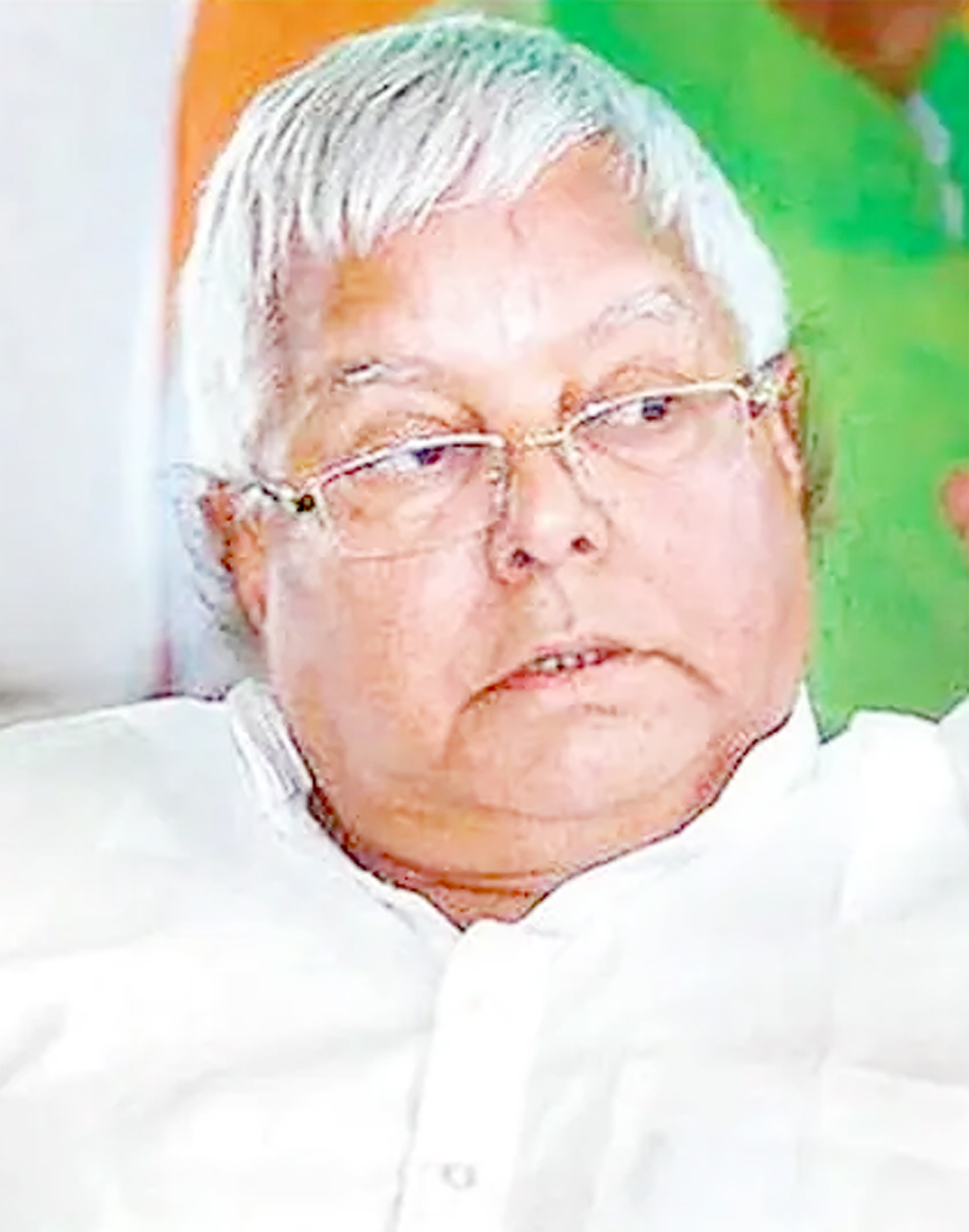 RANCHI, Jan 15:
A special CBI court today convicted RJD supremo and former Bihar Chief Minister Lalu Prasad in the Rs 139.5 crore Doranda treasury embezzlement case, the fifth and final case against him in the fodder scam.
Soon after the conviction, the ailing 73-year-old politician was shifted to Birsa Munda Central Jail in Ranchi and then he was admitted to the state-run Rajendra Institute of Medical Sciences (RIMS), an official said.
“Lalu Prasad has been admitted to the RIMS on health grounds and will be examined by a team of doctors,” he said.
The senior politician requested the court to pass an order to shift him to the RIMS on health grounds. CBI Judge Sudhanshu Kumar Shashi turned down Prasad’s plea but ordered the jail authorities to decide whether he needs any medical attention or not.
In jail since December 2017, Prasad served most of his sentence period at the RIMS. He was taken to All India Institute of Medical Sciences, New Delhi in January last year after his health condition deteriorated.
Prasad, who was present in the court, was taken into custody and arguments on the quantum of his sentence will be heard on February 21. The CBI counsel had earlier said the court will hear the arguments on sentence on February 18.
Welcoming the court’s decision, BJP Rajya Sabha MP and former Bihar deputy Chief Minister Sushil Kumar Modi, one of the petitioners in the fodder scam matter in the Patna High Court, said justice has finally been served to those who “pushed the state into darkness” for 15 years.
Prasad had earlier been sentenced to 14 years in jail in four other fodder scam cases. The final case was related to withdrawals of Rs 139.35 crore from Doranda treasury during his tenure as the Chief Minister of undivided Bihar.
“Of the 99 accused in the case, 24 were acquitted, while three-year jail terms have been pronounced for 34 accused. A total of 41 convicts have been sent to prison,” CBI counsel BMP Singh said.
On Prasad’s plea, directions were given to the jail superintendent and RIMS director to take necessary action keeping in mind his health, he said. The ebullient leader suffers from multiple ailments, including renal problems.
The CBI had examined 575 witnesses in the case, and filed charge sheet against 170 people. However, only 99 accused, including Prasad, faced trial which had commenced in 1996.
In the course of the 22-year-long trial, 55 accused died, while eight turned government approvers. As many as six accused are still absconding.
Prasad was accompanied to the court by his daughter and Rajya Sabha MP Misa Bharti. Many RJD leaders and workers also thronged the court premises.
Special CBI Judge Sudhanshu Kumar Shashi had on January 29 completed the hearing. All the accused were ordered to be physically present in the court on the day of the verdict.
Apart from Prasad, former MP Jagdish Sharma, the then Public Accounts Committee (PAC) chairman Dhruv Bhagat, Animal Husbandry Secretary Beck Julius and Animal Husbandry Assistant Director Dr K M Prasad were the main accused.
Reacting to the development, Sushil Kumar Modi said no accused can be saved if there is solid evidence against them.
“The Doranda case was the biggest among the fodder scam cases. We had filed a PIL in Patna High Court demanding a CBI inquiry into it. However, Prasad had opposed it saying he had constituted an SIT which comprised people who later went to prison.
“The Patna HC ordered a CBI probe. Prasad opposed it tooth and nail and even knocked the Supreme Court’s door. However, the apex court ordered that the probe should continue and asked Patna HC to monitor it. Had the high court not monitored the probe, Prasad would have got the cases dismissed long back,” he said.
The BJP leader said the RJD rule in Bihar was an “age of darkness”.
“There is a proverb in Bihar — boya ped babul ka toh aam kahaan se hoye? ( you reap what you sow). Justice has been served to the people under whom Bihar languished,” he said.
The fodder scam, pegged at Rs 950 crore, was first unearthed by the then Chaibasa Deputy Commissioner Amit Khare.
The Animal Husbandry Department had allegedly issued fake bills for large disbursements from government treasuries in various districts of undivided Bihar.
Prasad, then the Chief Minister, also held the finance portfolio.
The RJD supremo, who has been sentenced to 14 years in prison and slapped with a total fine of Rs 60 lakh, is on bail in four other cases related to Dumka, Deoghar and Chaibasa treasuries after conviction.
The CBI named Prasad as an accused in June 1997. The agency framed charges against Prasad and former Bihar Chief Minister Jagannath Mishra, who died in 2019.
The Central agency had registered 53 separate cases in connection with the scam in 1996. (PTI)