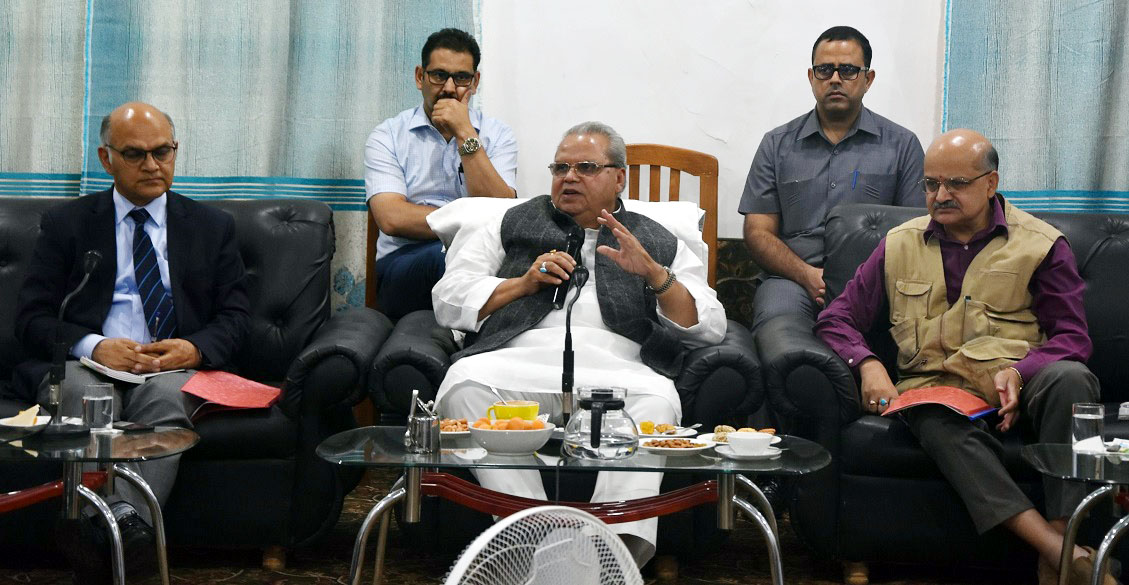 HODs/posts created for Ladakh Division would as decided

Seats in Professional Colleges to be protected

All concerns have been taken note of

KARGIL-   The Governor Satya Pal Malik, visited Kargil today to meet and interact with the representatives of the people of Kargil to understand their concerns following the formation of the Union Territory of Ladakh. He was accompanied by Advisor K K Sharma, the Chief Secretary  B. V. R. Subrahmanyam and the Principal Secretary Home, Shaleen Kabra. The Governor interacted with the members of the Joint Action Committee of Kargil and also a few other delegations.

Following detailed discussions with the delegations and understanding their concerns, the Governor assured them that their valid concerns would be given due consideration.

At the outset, the Governor assured the delegation that the entire nation admires and values the patriotism of the people of Kargil and the sacrifices they have made for the nation. Therefore, no injustice would be done to the people of Kargil at any point in time. The nation wants Kargil to prosper along with the rest of the nation and become a partner in the country’s economic progress. In fact, the recent decisions of the Government were meant to benefit the people of Ladakh, including Kargil, and speed up their progress as they would now be directly linked to the Union Government. The Governor assured the delegation that all steps would be taken to protect the identity, culture, heritage, language and social values of the people of Kargil.

On the specifics, the Governor mentioned that a few of the issues raised by them were in effect modifications of the State Reorganisation Act and these would be conveyed to the Union Government.

On most of the other issues, the Governor mentioned that steps would be taken to address the concerns of the people of Kargil. The LAHDC Act, as amended in 2018, would continue even under the Union Territory. The current LAHDC Act makes the Councils the most powerful councils in the country and would provide adequate scope for the people to fulfil their development aspirations. If any additional steps are needed to strengthen the LAHDC, this would addressed. Further, the arrangement of HODs created recently during the formation of Ladakh Division would continue equitably between Leh and Kargil. Further, the distribution of funds between the two districts would be equitable. This would ensure that both cities develop in tandem.

The details of the mechanism by which posts and employees would be split between J&K and Ladakh was explained to the delegation. As a UT which would be almost 100% tribal, protections to tribalscan be ensured under various provisions of the Constitution. With increased development and growth, there would be more employment opportunities for the youth. As for other policy matters and protections, there are a number of provisions in the Constitution protecting the interests of STs and tribal areas. The National Commission for STs would be asked to visit the area, discuss all matters and propose measures for ensuring adequate provisions for protecting the interests of tribal areas and STs. The Ministry of Tribal Affairs would also send a delegation of senior officials to work out modalities for ensuring benefits of all national schemes reach the people of Kargil. As for the status of J&K State Laws that are being made applicable to Ladakh and the future status of these if they get amended by the Assembly of J&K, this would be examined immediately and corrective measures would be taken under the State Reorganisation Act using the provisions to remove difficulties. On future amendments by the Central Government, the people of the region would certainly be consulted by the Lt Governor while proposing changes.

As regards the loss of current benefits available to Kargil in J&K, the Governor assured the delegation that seats in medical, engineering and other professional courses would continue to be kept available to Ladakh during the bifurcation process. The committee dividing assets and liabilities would ensure this. The Central Government would also be requested to reserve some seats for students in national educational institutions. On other issues, the Governor assured the delegation thatnothing would be done to harm the long term interests of the people of Kargil.

The Governor assured the delegation that the interests of the people of this beautiful district were close to his heart and he would take all steps for their progress. The Kargil airport would be made a commercial jet capable airport for which preparatory work is going on. Kargil, Drass, Zanskar and all other areas would then become top class tourist destinations. Assistance would be provided for completing theKargilBhawan in Delhi and the Council Secretariat. Work on the Zojila Tunnel would be expedited. The two new degree colleges announced by the Governor would be operationalised soon.  Vacancies at all levels would be filled up at the earliest. And most importantly, Kargil would be getting top priority for meeting its development need. The Governor requested the delegation to be patient and see for themselves the results on the ground in a few months.