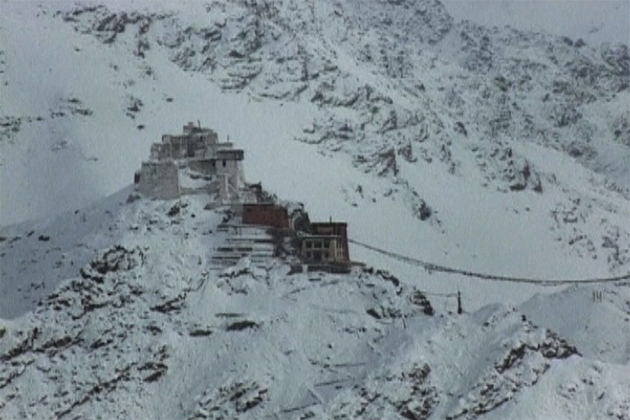 LEH :  The entire Ladakh region, including Leh, experienced fresh snowfall early this morning disrupting normal life and also affecting air and road traffic.
Roof and tree tops besides roads had turned white as people woke up this morning in Leh town and adjoining areas following fresh snowfall.
Though the night temperature has recorded some improvement, but cold wave conditions intensified in Leh today.
Traffic on the roads, which had become slippery due to snow, was also affected. However, vehicles were seen on the roads as the day progressed.
However, a number of roads to far flung and remote areas besides Khardungla were closed due to accumulation of snow. The region remained cut off after the national highway, connecting Ladakh region with Kashmir valley, was closed for winter months due to accumulation of snow and slippery road conditions, including Zojila pass Meenmarg.
About six inches of snow had accumulated at Nobra. However, the other upper reaches had moderate to heavy snowfall.   Drass, the coldest place in the world after Siberia, Meenmarg and other places in Kargil also received fresh snowfall.
The upper heights in the border district of Kargil, including areas near the Line of Control (LoC) also received moderate to heavy snowfall.
However, despite below minus 20 degree to 30 degree temperature, security forces remained guard on the LoC to prevent any infiltration from across the border.  (UNI)