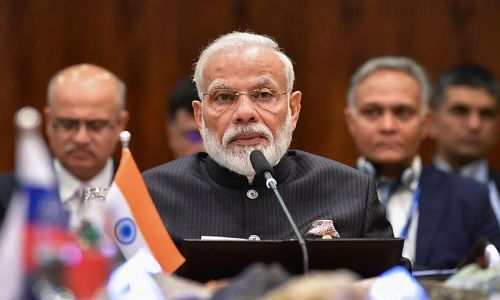 Aircraft took off from highest altitude airport in Leh

Sanjeev Pargal
JAMMU, Feb 23: Prime Minister Narendra Modi today made special mention of the Union Territory of Ladakh in his monthly ‘Mann Ki Baat’ Radio address saying the beautiful Valley of Ladakh witnessed momentous event on January 31 this year when history was made as an Indian Air Force (IAF) AN-32 aircraft took off from Leh’s Kushok Bakula Rinpoche Airport.
“Kushok Bakula Rinpoche Airport from which the plane took off from Leh is not only one of the highest altitude airports in India but also in the world,” Modi said as he lauded all the people involved in the mission especially the scientists.
He said it was a momentous event in the history when AN-32 aircraft of the Indian Air Force took off from Leh airport as a mixture of 10 per cent Indian bio-jet fuel was used in the flight and this was the first time that this mix was used in both engines.
Notably, the Prime Minister said, the bio-jet fuel is prepared from non-edible tree borne oil.
“The non-edible tree borne oil is procured from various tribal areas of India. These efforts will not only reduce carbon emissions but may also reduce India’s dependence on crude oil imports,” Modi said.
Congratulating all the people involved in this significant mission especially the scientists of Council of Scientific and Industrial Research (CSIR) and Indian Institute of Petroleum Dehradun (Uttarakhand), he said they made it possible to develop the technology to fly an aircraft with bio-fuel.
“They (the scientists and other people involved in mission) will also empower the ‘Make in India’ mission,” the Prime Minister said.
Modi said the use of a mixture of 10 per cent indigenously produced bio-jet fuel to fly an Indian Air Force transport aircraft will help bring down carbon emissions.
In his reply to Motion of Thanks on President’s Address in Parliament early this month, the Prime Minister had stated that the Central Government wants to develop Ladakh as ‘Carbon Neutral UT’ like the neighbouring country Bhutan saying that the Union Territory will benefit a lot from this step. He had also announced that he will visit Ladakh soon.
Ladakh was created a Union Territory following bifurcation of the erstwhile State of Jammu and Kashmir on August 5 last year by the Central Government.
Describing the biodiversity of India as a “unique treasure” for the entire humankind, Modi urged people to preserve and conserve it.
He referred to Tamil poetess Avvaiyar to drive home his point.
“What we know is just a handful of sand. What we do not know is like a universe in itself,” he said quoting her.
Similar is the case with the biodiversity of this country, the Prime Minister pointed out.
“The more you know, the more you realize the magnitude of what you do not know. Our biodiversity too is a unique treasure for the entire human kind. We have to preserve it, conserve it and explore further,” Modi said.
He added that the traditions and the legacy we have inherited teaches us compassion towards all living beings and boundless love for nature.
To join the culture of hospitality, every year numerous species of birds from across the world come to India. Throughout the year, India is home to many migratory species. “We are told that more than 500 varieties of birds fly in from varied regions,” he pointed out.
Modi also referred to the ‘Hunar Haat’ organized by the Ministry of Minority Affairs at the Rajpath.
Last week, Modi made a surprise visit to the Haat where he interacted with people, had ‘litti-chokha’ for lunch and enjoyed a hot kulhad of tea.
He said the Haat is a fine example of India’s diverse expanse, cultures, traditions, cuisines and the warmth of emotions.
“It is a venue where it is impossible to overlook the country’s diversity. Besides handicrafts, it displays the diversity of India’s varied cuisine too. In a single row, one could savour the sight of idli-dosa, chhole-bhature, daal-baati, khaman-khandvi …,” he said.
Modi narrated stories of courage and strength to convey that ‘age and disability’ cannot be a hurdle in achieving goals.
He gave the example of a 105-year old woman who cleared ‘level 4’ examination in Kerala recently, a 12-year-old girl who scaled Mount Aconcagua in South America and a young man from Uttar Pradesh with physical disability who opened his own slipper manufacturing unit, to drive home his point.
While narrating the story of 105-year-old Bhagirathi Amma, the Prime Minister said, “If we wish to progress in life, we should develop ourselves, if we wish to achieve something in life, the first pre-condition for that is the student within us must never die.”
He said there are several examples to show how women today are breaking “age-old shackles and attaining new heights”.
Modi referred to Kamya Karthikeyan (12), who scaled Mount Aconcagua, the highest peak of the Andes Mountains in South America, which is about 7,000 meters high.
Referring to her fitness level, the Prime Minister said, “A nation that is fit, will always be a nation that is a hit.”
He also urged people to pick up an adventurous activity and integrate one’s life with adventure.
Modi also talked about Salman of Moradabad in Uttar Pradesh. Salman, a specially-abled person, set up a slipper manufacturing unit, overcoming odds.
” … While Salman himself found it difficult to walk, he decided to manufacture slippers which help others to walk easily,” the Prime Minister said.