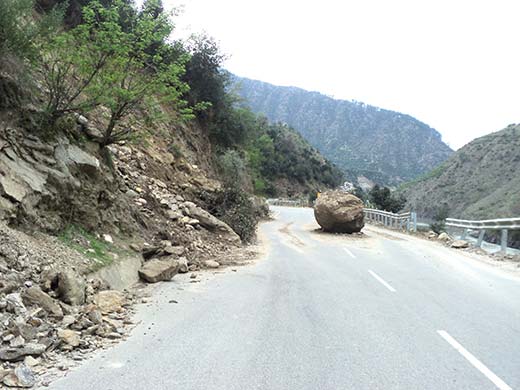 JAMMU, Nov 15: Putting several agencies particularly the National Highway Infrastructure Development Corporation Limited (NHIDCL) in the dock over dreadful accident on Khellani-Goha-Marmat Road which claimed 16 lives, a Government team has noticed absolute non-adherence to the directives of the Supreme Court Committee and non-existence of road safety parameters.
It has further noticed that all the recommendations made following such horrendous accidents in the erstwhile Doda district in the past have not been taken seriously by the concerned authorities and merely treated as ‘trash’.
Official sources told ‘EXCELSIOR’ that following tragic accident on Khellani-Goha-Marmat road which claimed 16 lives on November 12, Chief Secretary BVR Subrahmanyam asked the Principal Secretary to Government, Transport Department Dr Asgar Samoon to depute a team to ascertain the causes behind the tragedy.
Accordingly, a team comprised of R K Bhat, Additional Secretary Road Safety Council, Gurmukh Singh, Joint Transport Commissioner, Dhanatar Singh, Regional Transport Officer Jammu and Ravi Raina, Superintending Engineer Road Safety Council visited the spot of accident yesterday.
“The team noticed that recommendations of the Supreme Court Committee on Road Safety were never paid serious attention as far as construction and maintenance of Khellani-Goha-Marmat Road is concerned”, sources said while disclosing that there was neither any parapet nor crash barrier at the spot from where the ill-fated vehicle plunged into gorge.
“The entire 29.8 kilometre road is in pitiable condition and has not been maintained during the past one year by the NHIDCL. Moreover, there is poor drainage network on the sides of the road particularly at the spot of the accident and this was one of the main reasons behind the tragedy”, sources further said quoting the observations of the team, adding the truckers, who were eye-witness to the accident, told the visiting team that it was due to big pit on the road that driver failed to control the vehicle leading to its plunging into gorge.
As per the directives of the Supreme Court Committee on Road Safety, all the road safety parameters are required to be incorporated in the Detailed Project Report and then to be followed strictly at the time of construction of any road. However, most of these parameters were not taken into consideration in respect of Khellani-Goha-Marmat Road.
It is pertinent to mention here that this road was built by the Roads and Buildings Department and then handed over to the PMGSY but some years back the road was further handed over to National Highway Infrastructure Development Corporation Limited for maintenance.
“The NHIDCL despite being a fully owned company of the Union Ministry of Road Transport and Highways has failed to ensure strict compliance to the guidelines of the Supreme Court Committee on Road Safety”, sources said further quoting the observations of the Government team, adding had parapets or crash barriers been installed at vulnerable spots of this road the tragedy of November 12 could have been completely avoided.
They further said, “even Doda district administration cannot absolve itself as District Road Safety Action Plan was submitted only in the recent past despite numerous directions in this regard during the past several years”, adding “had the Road Safety Plan been formulated in time and implemented, the key road safety aspects on all the roads vulnerable to tragic accidents would have received due attention”.
“The Kishtwar district administration has yet not formulated and submitted the District Road Safety Action Plan to the Road Safety Council despite the fact that large number of lives have also been lost in this district during the current year”, sources further said.
While submitted detailed report to the Chief Secretary through Principal Secretary Transport Department, the Government team will also mention absolute non-seriousness on the part of the concerned authorities towards the recommendations made in the past, sources said.
It is pertinent to mention here that EXCELSIOR in its report dated July 24, 2019 while highlighting the recommendations made earlier by the Government teams had expressed apprehension about dilly-dallying approach in implementation of the same and the same has turned true after the visiting team noticed complete inaction.
While pointing towards Road Safety Measures specified by the Ministry of Road Transport and Highways in its 4th Regional Conference on Road Safety, the Road Safety Council of J&K had a number of times laid stress on installation of crash barriers at all the vulnerable locations.
Moreover, recommendations were made about increasing the number of Traffic Police and Motor Vehicle Department personnel and ensuring that Executive Magistrates, who too enjoy the powers to challan the vehicles for violation of rules, pay serious attention towards this aspect.
“Now, it is to be seen whether causes behind the latest tragic accident would receive due attention of the administration of the J&K Union Territory”, sources said.