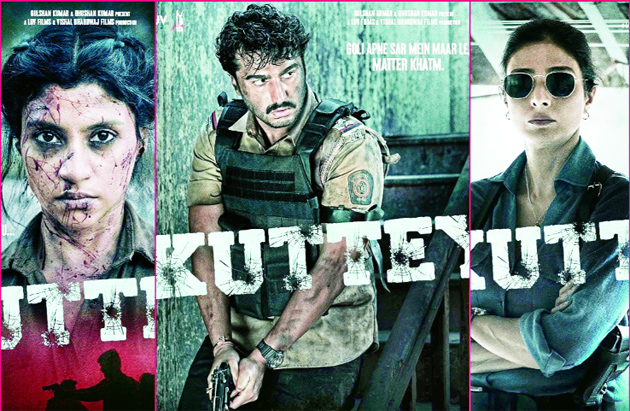 Vishal Bhardwaj over the years with his collaboration with Gulzar Sahab has become a genre in Indian Cinema. His idea of setting his stories in land politically charged and shaping a world that speaks of freedom has been a liberating escape. Decades into the business, he now fuels his heir to take the legacy ahead and rightly so. Enters, Aasmaan Bhardwaj. With a team that is no less than a tall-order dream, he ventures out to tell a quirky yet rooted story and like his father does what he knows best, serving top-notch content.
Written by Aasmaan with Vishal being credited for additional screenplay and dialogues, Kuttey is a movie that is a game of Ludo where every section of the board has pawns working together to beat the pawns from the other boxes. In his writing, the filmmaker shapes the movie as a maze. No one cares about others, you never know who will double cross and kill someone, and the mystery continues. It is not an easy genre, but Aasmaan does an amazing job of sticking to a modified three-act structure yet doesn’t let it ever feel like a structured mess.
There is chaos in every scene that Aasmaan shapes. He takes his sweet time in setting the base for a story that will take a chaotic shape in the second half. It is a story that very bravely relies a whole lot on the second half and the filmmaker takes that risk quite consciously and makes sure he does his best to not let it look like an imbalanced product. Like Vishal Bhardwaj’s superpower is his poetry and the presence of it in the frame, his son holds a quirky sense of humour and the darkest way to execute it. He makes you laugh at the most traumatic scenes and never lets it sound illogical. Because he writes the characters at the base level so hopeless and stone-hearted that there is no scope for irk when a man falls under a moving train.
One has to credit the debutant director for being brave enough to not let the presence of massive stars affect his voice. His need to give every woman in the frame the agency she deserves, talk about the marginalized pushed to take up weapons, or even the fact that a righteous cop chooses to go on the dark side without the screenplay judging either of them even once is visible. There is no gender to any character in this movie, it could be a man, or a woman, but it all depends on their position in this hierarchy. The clever decision is to also set the story in a limited world rather than broadening the horizon and going haywire. The reward for that chase and fight is not something that affects the larger-than-life syndicate (eg: drugs or a treasure), but something that passes by us everyday we walk on the road. Remember, I said rooted?
Aasmaan handles the climax so cunningly that it all blends into one and fades back into oblivion as a Faiz Ahmed Faiz poetry plays in the background. One thing that he should have explored more is the world that Konkona’s character Laxmi comes from. Also, why so less of Naseeruddin Shah and why is his part borderline inconsequential when it is supposed to be one of the most powerful?
The art of writing characters in a way that the first 2 minutes of their screentime explain to you where they come from is rare. Aasmaan has it. It is Tabu’s world and we are just living in it rent-free. The actor is out on cinema domination and how. She plays Poonam aka Pami, a police officer who has climbed the stairs of misogyny to now rule the same men who subjected her to it. The place she is in, she calls encountering people ‘masti’ and doesn’t think twice before she kills someone. Tabu is as effortless as an actor can be. No one can even come close to how skillfully she makes every character hers.
Arjun Kapoor plays a corrupt police officer who is also religious and observes fast on Tuesdays. He breaks that fast and worships the god before he takes a gun and butchers an entire party for money. I have been saying this for years, the actor has a range and deserves so much more. After the amazing Sandeep Aur Pinky Faraar here he plays the part where he doesn’t overdo anything. He finds his comfort spot and plays there.
Radhika Madan deserves to be seen and appreciated more. For a character that is privileged yet has nothing, she brings out the dilemma well. Accompanied by Shardul who is seasoned in his own way, they do manage to bring out the emotions in their storyline with ease. Watching the actor after Eeb Allay Ooo! working with prolific names feels like a victory. But a sequence from the trailer featuring them is also missing from the theatre cut. I wonder why?
Kumud Mishra is a beast and one that doesn’t make noise but lets his action speak. If there is an award for the most controlled performer, it has to go to him. Konkona Sen Sharma knows what creates magic and does just that. Though she deserved much more screentime, she does an intriguing job.
Courtesy : https://www.koimoi.com/bollywood-movies