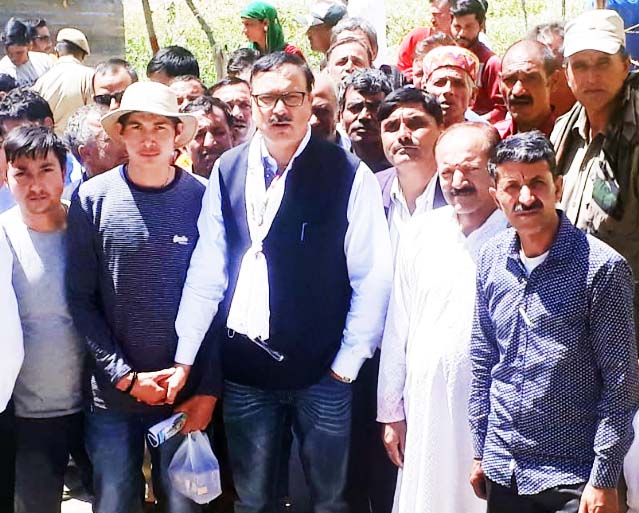 Excelsior Correspondent
KISHTWAR, Sept 3: Senior National Conference leader and former Minister Sajjad Ahmad Kichloo today demanded commencement of work on Sapphire mines in Paddar area of Kishtwar district.
During his extensive visit to Machail, Dangale, Lusaini, Sumcham, Gorna, Jaseri, Hangnoo, and Haloti villages in Paddar Sub Division, the NC leader met with the several delegations. Some locals told Kichloo that Sapphire mines was closed for many years as the previous Government of National Conference also invited tender for the said purpose, but the previous coalition Government created hurdles in the path of development.
Stressing upon the need to commence work on Sapphire mines Kichloo assured the people to take up the matter with the new Governor. He also stressed for promoting medicinal plants/ herbs in this area.
During the `Public Darbar’, Kichloo referred to the importance of “Machail Chandi Shrine,” and “Buddhist Gumpa” in which several devotees from not only the entire region of Jammu and Kashmir but from other states also visited, which automatically promotes tourism and culture of the area.
Apart from this, several locals raised several demands including better road connectivity, availability of ration round the year, opening of employment avenues for youth of the area, up-gradation of health care facilities, improvement in supply of water and electricity besides many others.
Responding to the demands, Kichloo assured them that their genuine demands will be fulfilled soon and he wopuld strongly project the same before the concerned officers.
Kichloo stressed that Government should pay attention to the immediate commencement of work on Sapphire mines in which local youths will be absorbed and they earn their livelihood and in turn, this Sapphire mines would generate revenue for the State.
The MLC also appealed to the Government construct Gulabgarh to Machail road and Machail to Sumcham road under the scheme of PMGSY, so that locals can benefit and tourists and pilgrims also visit the said areas in the coming days.
District vice president Kartar Singh Rathore, Janki Nath, Sarpanch Gurdesh Kumar, Mool Raj, Sansar Singh, Sardar Singh, Dev Raj, Sonam Dorjey, Rahul, Sonam Bhutti, Ram Nath, Bodh Raj, Narinder and others also accompanied.

At SKIMS, 238 out of 283 suspected patients discharged: Director

At SKIMS, doctors skip lunch breaks to save PPE kits