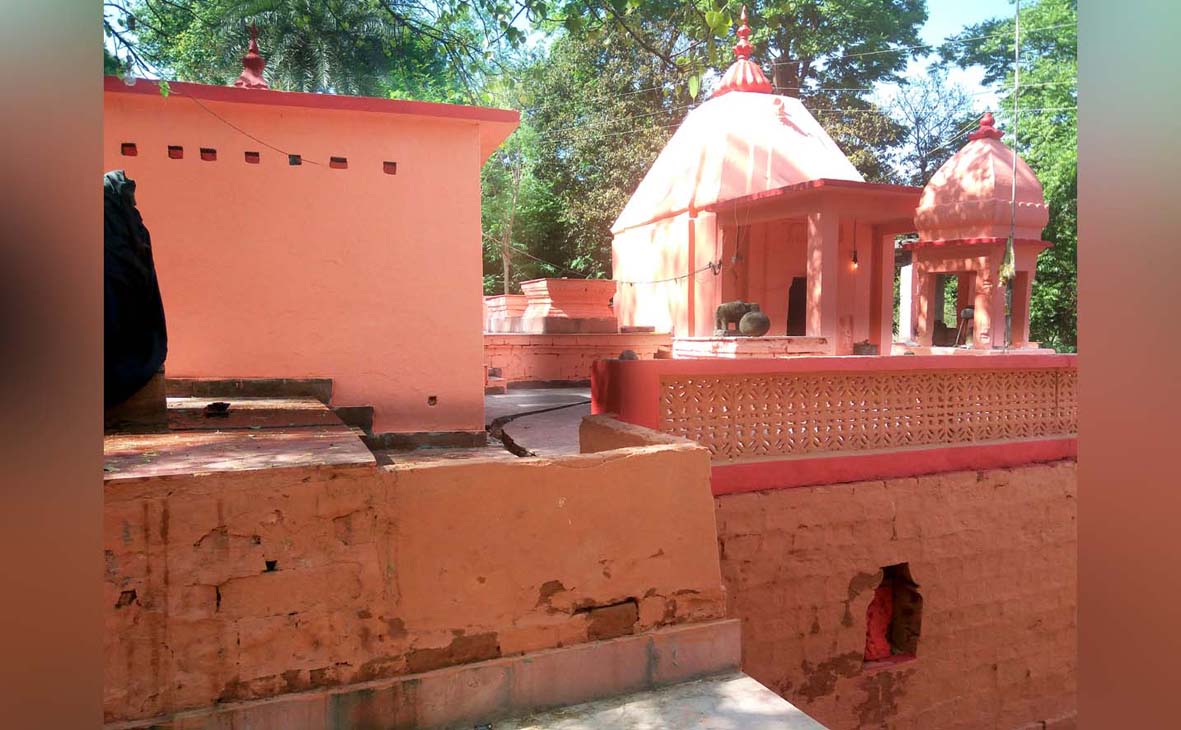 Abhishek Jandial
The Zest of exploring JAMMU’s long lost history made us to reach about 70 KMs far from the City of Temples. A small village Khoon in Majalta Tehsil of Udhampur District having its threads connected with Mahabharata as well as Ramayana, is located nearby village Ramkot on Dhar Road Udhampur, forgotten in the mist of time despite being rich in the history of vedic Era. On our halt at village’s only visible tea-stall cum sweet shop, when we tried to break ice with Puran Chand Gupta (the shopkeeper), he started opening his cards one after another after showing initial but little reluctance to waste his business time with us but as soon as we ordered tea and snacks from him, his reluctance in no time disappears under the rays of eagerness to make an honest attempt to let the world know the importance of his place. His each card was linked to stories and history. He made us to know why the village is named Khoon.
Aksham, an eighteen year boy who was keenly listening to our conversation, interrupted our talk and offered me to volunteer in showing the historic remains and proofs, still living in air of the village. After riding my bike on kacha and stony road for about 1Km, he voiced gently ‘Bas aa gya bia’. It was an old built temple enclosing a Bawli (natural spring), Peepal tree, Gods sculptured in stones but no living person was visible near the temple.
After going through a bundle of authentic sources,I got to know about the place Khoon where the blood stains of Arjun (Pandava) are still peeping out of some wet stones resting on water. Not only this, the place has been the seat of a large and heavy tyre sized earring of stone (unable to get lift so far even with excavators) , though found in bushes and shrubs.If stories are to be believed and listened, it narrates that these earring had once belonged to the ears of Hindu Deity Hanuman before falling down to the ground on his flying journey in search of Sanjeevini Bhuti to bring back life in another Human Deity Lakshman’s body who was wounded with Ravan’s arrow.
We forwarded inside the temple to find a small water streamlet flowing by. When asked from the village boy “where are the anticipated blood stains? “, he requested me to come inside water. My actions followed his words and we started digging history by turning stones one by one. To my great surprise, a few of the wet stones were showing red marks and yes all were the real blood stains. I’ve myself eyewitnessed them by touching and rubbing them again and again.
Aksham, the adventure boy then opened Mansar’s Wikipedia page on his phone to authenticate his claims. Mansar is a famous tourist destination. He also made me know the relation among Khoon, Mansar and Surinsar. His Wikipedia page showed us history dated back 1500 BC (RigVedic Age). The historic tale goes-Arjun’s son Babar Vahan was ruling this area during Mahabharata. When the Mahabharata war was over, an Ashwamegh Yagya was performed by Arjun to prove his land superiority. His horse (sign of power for Ashwamegh Yagya) was captured by Babar Vahan at the Village Khoon of present where Arjun was killed by Babar Vahan. With joy of victory, he presented the head of Arjun to his Mother Ulpi. She revealed his son that he had killed his father. To make Arjun alive again, Mani from Sheshnag was required. So Babar Vahan made a Surang through his arrow and formed Surangsar(now SURINSAR). After defeating Sheshnag and capturing Mani, Babar Vahan came out at Manisar(now MANSAR). At Present Mansar and Surinsar have bloomed up as the famous and beautiful tourist spots, lakes, boating destinations and as the temples of religious importances.But how many of Jammuities did hear the name of Khoon? I guess very few.
We suddenly noticed another human voice being heard apart from ours.It was an ascetic(Sandhu) singing religious hymns in praise of God.I requested my co-explorer guy to arrange a short meeting with him, which he did happily.”I’ve not any kind of expectations from anyone. Every person is doing business in this world” was the silence breaking words of temple priest who lives in the temple premises. He, however, thanked the locals who have been caring the temple for centuries.He later on assured “As long as as I’m here, the sacred history of the temple is in safer hands”.The conversation halted with his slight but noticeable smile and he then made him busy again in giving waters to the Shivling placed in the temple.
The place has seen so many sunrises and sunsets in a hope to get recognised one day and then the place will take the spectators and visitors to a different world where ‘Khoon’ worths much more than just red blood stains.