JAMMU, Aug 29: Former Deputy Chief Minister and MLA Gandhi Nagar, Kavinder Gupta today visited Channi Rama area and took stock of the developmental works being executed in the area.
While addressing the gathering Gupta highlighted the achievements by BJP in Jammu and lamblasted Congress. Gupta said that the BJP has ensured the implementation of every scheme started by the Narendra Modi led NDA Government at the very ground level. He said that BJP has worked to see that every single scheme reaches the targeted population.
He also prompted the BJP workers of the State in general and Gandhi Nagar Constituency in particular to double their efforts in serving the people of this State and ensure that public again gives decisive mandate in favour of the existing MLAs. He said that the opposition has turned issueless and hence playing with the public sentiments, but today’s public is well aware of ground facts. He said some leaders of Congress are befooling the public but they will be shown their place in forthcoming Parliamentary elections 2019.
While lambasting the earlier rulers of the State and opposition rule at Centre, he said, only members of one family were aware about the funds being provided by the Union Government, but now there is total transparency and every citizen has the information about what is being sanctioned for the State. He said that the Narendra Modi Government has given specific stress on the development of state of Jammu & Kashmir.
Gupta took note of all the genuine demands raised by the inhabitants and assured the public that all the genuine demands shall be met out soon. Gupta was accompanied by Baldev Blowria, Ankush Gupta, Amit Sharma among others.
Baldev Blowria while addressing the gathering complimented the former Deputy Chief Minister and MLA Gandhi Nagar, Kavinder Gupta. He said that Kavinder Gupta is easily accessible to public and always available for the immediate solutions to the genuine problems of the Inhabitants. He said that every worker of the Constituency should come forward and strengthen the party at grass root level.
He said all the workers should dedicate at least two hours on daily basis for the service of people and spread the awareness of the social economic schemes and other schemes of the State and Centre Government to general masses. He also complimented Kavinder Gupta on behalf of residents of Hakumat lane which was visited by him yesterday, for getting the macamadization work stated. 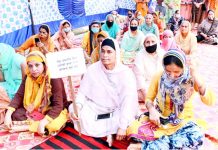